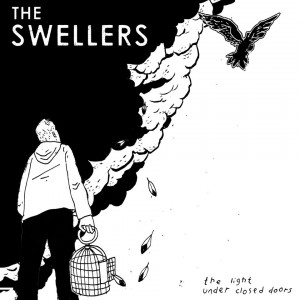 Finding a great record is a difficult endeavor. You must take into account every component of the music and the artist behind it. Style, quality, and writing are the basics to make an album good, but to be great there has to be a feeling. The Swellers’ latest album The Light Under Closed Doors feels like a great record. The band has settled into a sound that suits them perfectly, and it shows. Though the group has been through a few frustrating label changes, they’ve still put out a pretty steady flow of music over the years, including last year’s self-released EP Running Out of Places To Go. Now, the band has landed with No Sleep Records to release The Light Under Closed Doors. This record is a culmination of the difficulties and experiences of the band that is genuine and honest, making this their most relatable release yet.

For those unfamiliar with The Swellers, this record is the perfect place to jump into their sound. Opening track “Should” draws the listener in with a classic style of punk rock and the simple melody of the chorus, but the band shines on “Big Hearts.” The second track in, “Big Hearts” is one of the catchiest on the album. Vocalist and guitarist Nick Diener sings, “Give me a melody, give me a feeling / Give me something I can finally believe in,” in the very first line of the song and continues a string of relatable lyrics throughout the track. “Big Hearts” is an anthem not only for the fans, but for the band itself. Poignant lines like “Regret, repress, rebuild” and “When you’ve lost the fight / It’s the right time to come back again” narrate the band’s own difficulties, but also their readiness to continue to progress.

“Becoming Self Aware” is one of the most thoughtful on this record. The lyrics feel like internal reflection as one comes to the realization of being on the outside. In the second verse, Diener sings, “Rethinking where I’m standing now, and if I’ll ever stand again/ I’m on the outside looking in.” Drummer Jonathan Diener’s rumbling drum sequence behind the lines “I know I could call this home / But I don’t want to make this awkward anymore” makes for a moving bridge about common personal struggles.

“Friends Again (We Can’t Be)” ranks with “Big Hearts” for the catchiest songs on the album. The melody is upbeat and easy to sing along to with lyrics about moving forward and letting go, bleeding honesty particularly in the lines, “You finally came clean, but you got nothing that I need/ Though time has healed all wounds, there is nothing I can do.” The chorus features a faint harmony that, if it were just a little more prominent, would make this song completely and hopelessly addicting.

Closing the album is “Call It A Night,” which ends The Light Under Closed Doors with just the right amount of fervor. The song’s melodic chorus, “Regress and rewind, the final piece of mind / When it all comes to light, we can call it a night,” is thoughtful and lasting enough to stick with you in the moments of silence after the album has ended and long after.

The Swellers have shown with this release that they are exactly where they need to be. The Light Under Closed Doors is secure in sound and style and there is a sense of comfort that comes with knowing that everything about a record is in place and feels right. The Swellers’ overall sound is hearty and strong, and while the band is not necessarily breaking boundaries, they are reminding listeners what it is to have good music for any mood or situation. This release is upbeat, melodic, and memorable to any listener, new or old. The Swellers prove on this record that punk music does not have to be angry or in your face to get under your skin and stick with you.