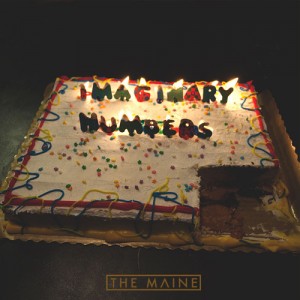 For the last three years, The Maine have moved on a steady tangent away from their original pop punk roots towards an indie alt-rock aesthetic. With the first acoustic EP of their career, the band continues in the same direction no holds barred. From their semi-stripped down tour in support of Pioneer to the notable increase of acoustic instruments on Forever Halloween, it’s obvious the band has been wanting to unplug for a while now. Although somewhat predictable, Imaginary Numbers is a highly impressive five-song effort that once again displays the band’s burgeoning maturity and musicianship. Simple yet powerful, and bare yet meaningful, it is the perfect soundtrack for winter.

“Raining in Paris” begins with laidback acoustic strumming reminiscent of newer A Rocket to the Moon until John O’Callaghan’s slightly raspy drawl dominates the forefront of the mix. The band’s songwriting consistently improves with each release, especially in this case as O’Callaghan croons, “My heart is in the city of love / But it’s raining in Paris / What good is a heart of gold / With nobody to share it with,” heaping plenty of geographical and meteorological analogies to convey his loneliness. That wistful loneliness with a glimmer of hope serves as the overriding theme for the record. “Room With No Windows” ups the existential ante along with guitars, background vocals, and bells that hint of The Beatles’ quintessential Sgt. Pepper’s Lonely Hearts Club Band.

Keeping with the nostalgic influences, “Perfectly Out of Key” strongly channels Bryan Adams with a piano riff that’s both bold and gentle and vocals from O’Callaghan that are huskier and higher than usual. The song closes with, “I would rather live and die in fantasy,” a fitting line since the entire EP feels like a dream – particularly the next track, “Visions,” which has a murky, surreal feel. If folk-emo ever became a genre, this song would fit right in with plucked guitar riffs, a harmonica, and the interesting lyrical conflict, “I’ve learned to loathe these goddamn visions / but I just can’t wait to fall back to sleep.” Six-minute closer “Lovely Sad,” whose title serves as the best explanation of the band’s sound, also provides an interesting reflection on the past few years of the band’s career. The song finally explains the EP’s title as pertaining to money, or the rampant commercialism that dominates our livelihood.

Imaginary Numbers serves as the final departure from any musical growing pains The Maine have undergone these past few years. Throughout these five tracks, the band find room to experiment on each song, yet come off as confident as ever. Having consistently released solid releases over and over again, The Maine are swiftly on their way to becoming an alt-rock powerhouse.