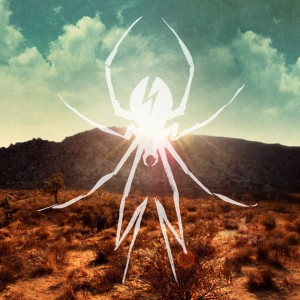 If  The Black Parade was My Chemical Romance’s take on the 1970’s over the top opera rock concept album, then  Danger Days: The True Lives of the Fabulous Killjoys is the band’s attempt at recreating the 1980’s synth laden rock and roll.   As the band transforms itself into The Fabulous Killjoys in this seemingly barren wasteland of a future (possibly California, where the album was recorded), we are introduced to a completely new yet familiar incarnation of My Chemical Romance.   The album starts off perfectly, with the fictional Doctor Death Defy yelling “Killjoys, make some noise!” and introducing us to the first single “Na Na Na (Na Na Na Na Na Na Na Na Na)”.   A synthesizer headlines a plethora of nuances that have been included on this album to accompany the straight-ahead rock record that this actually is.

Each member of this band has continually had a hand in pushing the envelope of what people think they should sound like.   Lead singer Gerard Way has continued to perfect his vocals that fit perfectly along the riffs created by lead guitarist Ray Toro.   Rhythm guitarist Frank Iero accompanies Toro, while the pair backup Way for a three way vocal attack that ranges from crooning to screaming all the while keeping time with the chugging of bassist Mikey Way.   With the departure of Bob Bryar, My Chemical Romance enlisted a pair of drummers for the recording sessions; studio musician Dorian Crozier and Meat Loaf drummer John Miceli. Rob Cavallo obviously understands this band, having produced the band’s 2006 concept album, as well as having a hand in 1980’s hair metal scene.   Cavallo is well known for signing Greenday but before that he produced some of the preeminent bands that defined the genre.   He brings a working knowledge of everything 80’s rock to the table and it really shows through on this 4th studio album from My Chemical Romance, the band’s 3rd with Reprise records.

The aggression and emotion in Way’s vocals drive an album that runs on pure adrenaline for its 54-minute life.   After the lead single sets an energetic stage, “Bulletproof Heart” seemingly slows things down, but do not be fooled into thinking there are any ballads on this album.   Songs like “Sing”, “The Only Hope For Me Is You” and “The Kids From Yesterday” all build to choruses showcasing Way’s vocal range and approach ballad territory but the dual guitar attack of Toro and Iero remind us this is a rock and roll record.   With “Party Poison” and “Destroya”, My Chemical Romance dares you to scream at the top of your lungs and shred on your imaginary guitar.   The band’s newfound fancy for electronica is showcased on “Planetary (GO!)”, which begs you to find a dance floor and let loose.  The aforementioned “Party Poison” is a perfect example of this group’s affinity to the 80’s, with a Judas Priest riff leading the way for a Twisted Sister party anthem.   The last track, “Vampire Money” is about the band’s decision to turn down a boatload of cash from the people behind the  Twilight phenomenon.

Nothing on  Danger Days: The True Lives of the Fabulous Killjoys sounds like anything My Chemical Romance has done before, although there is an intense feeling of nostalgia listening to anything this band releases.   This is the most punk rock record this New Jersey five-piece could have produced because punk itself is all about changing what rock means.   Everything you loved about Three Cheers For Sweet Revenge and The Black Parade are present on this record, although this synthesizer laden rock and roll opus sounds brand new.  My Chemical Romance have reinvented their sound yet again and released the most rock and roll album of 2010.   These guys know who is responsible for their success, and it is the fans that have stood by every album and every reincarnation. This one is for us.  (4.0/5.0)