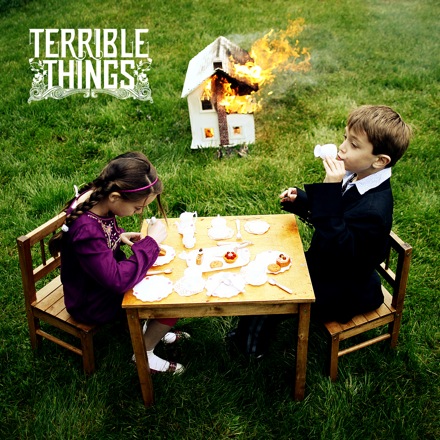 “This is not a revolution / until we say it is!”

Occasionally, when a musician and his former band part ways, it can be detrimental; but in some cases it can cause three like souls to find one another and create something that has been burning within them all this time.   The soul of Hot Rod Circuit, the throat and guitar that gave Louder Now its balls and the drumming technique that kept the pace for the first three Coheed and Cambria albums have come together to form Terrible Things, releasing its debut self-titled album through Universal/Motown on August 31st, 2010.

While the trio are best known individually for the punk-rock efforts of their former bands; Terrible Things organically meanders into previously uncharted territories of indie, folk, acoustic, ambient and pop in addition to the rock and punk that are expected.

The trio came together easier than one might envision, with Fred Mascherino and Andy Jackson joining forces on songs that the former Taking Back Sunday guitarist deemed band-worthy, stepping above his solo career. Josh Eppard came into the picture when Mascherino needed to add ‘my favorite drummer’ to the mix, with the pair already being familiar with one another from the days of Breaking Pangaea and Coheed and Cambria touring together.   Jackson told Rock Show Addiction that playing the first shows felt right because it’s the scene that they all grew up in.

This album encapsulates the concept envisioned by Mascherino, about the fires that terrified his depressing former hometown of Coatesville, Pennsylvania.   Reasoning for abandoning the town shine clear on songs like “Up At Night”, “People talk like I should have stayed / should have played those cards / but I played it out in my head and I might as well have ended up dead”.

A string of arson attacks terrorized this and additional lower class neighborhoods of Chester County from 2007-2009. “It’s not a political album,” says Mascherino in an interview with Alternative Press, “I leave that to others. But growing up in Coatesville, the shock of these fires affected me in a way I was even surprised at.”

Lyrically, the album consists mainly of Mascherino’s thoughts and feelings on the topic although Jackson added a few songs to complete the concept including “Not Alone” and “Wrap Me Up”.   Many of the song titles are very indicative of the ideas that are contained within the lyrics — “Up At Night”, about the fear and alienation felt by the residents of the town; “Terrible Things”, seemingly a dialogue between the arsonists; “Conspiracy”, where someone sees something unusual and nobody believes them.   The grand finale of this album is the nearly nine-minute “The Arsonist’s Wife”, which tells the story of the wife of the culprit told from her point of view.

The fact that Jackson and Mascherino share lead and backup vocals adds quite a dynamic to the already powerful music.   Although the band did not initially set out to create a concept album, the other member’s understood Mascherino’s passion for the subject and backed him 100%.

Buy the album on Shockhound here.