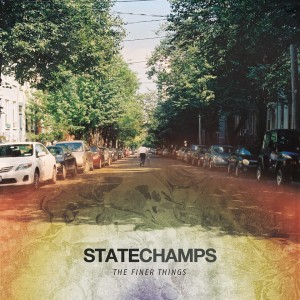 In the past few years, there has been a constant deluge of pop punk bands. One after the other, angsty teenagers are scrambling to defend pizza, broken hearts, and late nights with their friends. Unfortunately, in a genre defined by quite a narrow range of guitar riffs and lyrical themes, most bands struggle to separate themselves from the pack. While many enjoy moderate success, few are able to reach the prominence of bands like The Wonder Years or The Story So Far. State Champs are potentially the next band that could ascend to their ranks. Their last EP Overslept displayed skill and musicianship well beyond their years or even pop punk bands in general, leaving everyone begging for a full-length. Engineered by Sam Pura (The Story So Far, The American Scene), produced by Steve Klein of New Found Glory, and released on Pure Noise Records, The Finer Things already screams pop punk gold. Luckily the album lives up to the anticipation, blowing past any expectations we had from their EP.

The album opens with lead single “Elevated,” whose bright guitar riffs immediately transport the listener into the album art. Despite a fall release, the album emanates summer, with every song packed with catchy refrains and driven instrumentals. State Champs have often been compared to The Story So Far, and you can definitely hear the vocal similarities between Parker Cannon and Derek Discanio; however, Discanio goes on to demonstrate a certain amount of control and clarity unique to himself. “Deadly Conversation” starts off with an acoustic intro where Discanio delivers the heavy-hitting line, “We’re indifferent to this deadly conversation,” before the instruments propel the song into a fast-paced pop punk jam. Discanio’s confidence as a frontman is further evident when he belts out the second verse over just the drums. His talent continues to shine in “Hard to Please” where he injects the song’s multiple “whoa’s” with R&B tones reminiscent of fellow powerhouse vocalist Matty Arsenault of A Loss For Words.

“Prepare to be Noticed” allows the rhythm section to shine with a bouncy riff courtesy of bassist William Goodermote and drummer Evan Ambrosio. The track as a whole also contains traces of Take This To Your Grave-era Fall Out Boy. “Over the Line” keeps up the energy with a solid stream of guitars throughout the song punctuated by the drums as Discanio sings lines that a live crowd will be guaranteed to shout back at him.

The band’s infectious melodies refuse to falter in the latter half of the album, beginning with “Simple Existence,” whose prechorus breakdown will be another huge crowd-pleaser. The album also includes reworked versions of the two best songs from their EP, “Remedy” and “Critical.” “Remedy” is a New Found Glory-esque tune with one of the catchiest riffs and choruses on the entire album, while “Critical” takes the time to show off the band’s complexity and versatility. In between those tracks are “Nothing’s Wrong” and “Mind Bottled,” two more massive pop punk anthems. The album closes with “Easy Enough,” which contains the most laidback choruses on the album, although the instruments still barely slow down. Discanio and Ambrosio then ease the record into its final conclusion as the rest of the band surrounds them with distant “whoa’s.”

What makes State Champs so special is their ability to draw from the best of the genre and spin it into something entirely their own. Albums completely devoid of filler are extremely rare these days, yet on their debut album, State Champs have already managed to pack every single song with colossal hooks and melodies, pouring every ounce of their insane talent into this album. The Finer Things stands out as one of the best pop punk releases this year and raises the bar sky high for the genre.