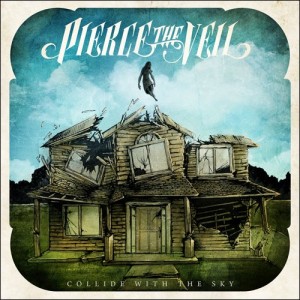 Pierce The Veil’s latest effort Collide With The Sky will turn nay-sayers into die-hard fans. Finding a new home on Fearless Records, this album sees the band find their stride and make some of the best music of their career. They’ve fixed any complaints you might have had with their former sound and then some, and the result is a sound more powerful than ever before.

Even though it’s only a little more than a minute long, don’t plan on skipping over the intro — “May These Noises Startle You In Your Sleep” represents the whole album with its catchy riffs and raw screaming before leading seamlessly into the next track, “Hell Above.” Both this song and its successor “Bulls In The Bronx” are fast-paced with ambitious guitar riffs and conversational lyrics. Not only is their new sound impressive, their features are also spot on; the roster includes Sleeping With Sirens’ Kellin Quinn, Asking Alexandria’s Danny Worsnop, and Oh No Fiasco’s Lindsey Stamey. Each singer’s personality fits the attitude of their songs perfectly. Quinn brings a sense of determination to “King For A Day,” making this song a highlight of the album vocally. Worsnop also finds his place on the album in “Tangled In The Great Escape,” harmonizing surprisingly well with Vic Fuentes’ clean vocals while countering bassist Jaime Preciado’s screams. Stamey brings a feminine touch to “Hold On Till I May,” teaming up with Fuentes for a duet that adds a delicateness to the album.

Songs like “Props & Mayhem” and “Stained Glass And Colorful Tears” see Pierce The Veil break out of their post hardcore mold with electronic samples to accentuate their finer features. “Stained Glass And Colorful Tears” steps away from the regular rock beat to bring in the jazz style hinted at in the intro. “I’m Low On Gas And You Need A Jacket” dials it down a notch, letting drummer Mike Fuentes focus his efforts on adding style to the song rather than keeping up his usual intensity. Lead guitarist Tony Perry gets his share of limelight as well, taking you through some of the band’s sweetest solos to date. The band gets creative on tracks like “A Match Into Water” and “The First Punch,” experimenting with tempo changes to hold your attention. The whole album is an experience you won’t be able to press pause on, proving that Pierce The Veil are no longer your average, run-of-the-mill post hardcore band.