by Sherin Nicole with thoughts from Soma Brodhun

Basically: Jessica Jones turns girl-power into a jump kick to the head!

The beginning of Season 2 of Jessica Jones finds our reluctant hero wrestling with her identity: Is she a superhero or is she the product of whatever made her super strong? For us, the second part of that question is the lure that pulls us into the story.

They say what doesn’t kill you makes you stronger. For Jessica (Krysten Ritter) that’s all too true—physically speaking. Before the car accident that killed her family she lived as an average teen. After the car accident Jessica disappeared. Twenty days later she showed up in a hospital bed. Now she can bend steel beams. But physical strength can’t protect her from the trauma she’s faced since then. She’s been through several types of hell, most of them created by a devil named Kilgrave (David Tennant). Jessica dealt with Kilgrave (in a very permanent way) in S1 but the anger, the guilt, and the pain remain. 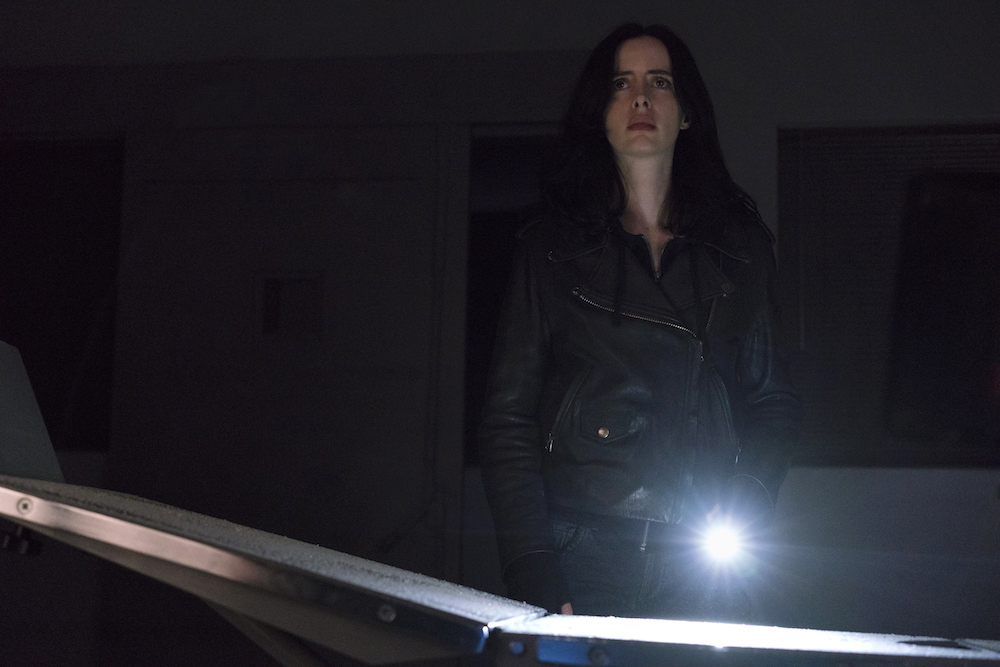 We’re not going to spoil S2 for you but, we can say, the anger management scene at the start of episode 4 (hinted at in the trailer below) is one of the finest of the series. It’ll make you smile in its humor and nod to its truth.

Back to business, Jessica is going strong in the P.I. game. Her clients kind of suck but that’s completely Jessica’s fault. She refuses to take on any case she might get emotionally attached to. Her neighbor Malcolm (Eka Darville) has taken on sidekick duties. Jessica is constantly firing him and he can’t stop tossing inconvenient truths at her. There are major big sister x little brother vibes there. Most of Jessica’s relationships have a familial tinge. Cold-blooded attorney Jeri Hogarth (Carrie-Anne Moss) is akin to the aunty who uses you but slyly calls it affection. Then there’s Patsy aka Trish (Rachel Taylor), Jessica’s adopted sister, the catalyst for most of what goes wrong in the second season. Why? Because Trish’s superpower is being the self-proclaimed center of the universe and she’s good at it. 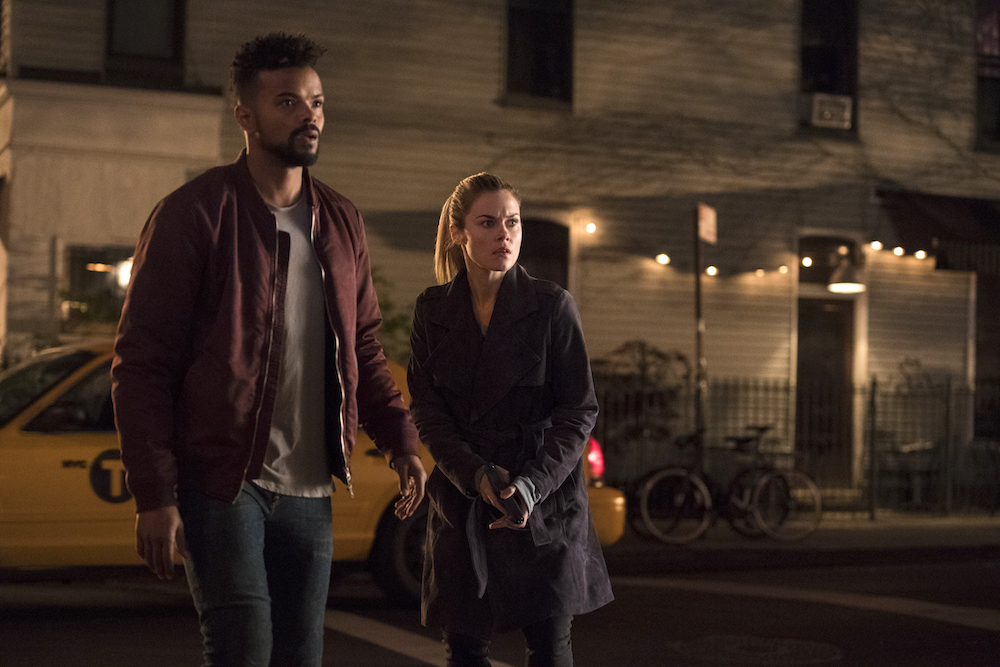 The emotional push and pull of the season comes down to how well the characters can push each other’s buttons. The manipulations fly high, beginning with Trish’s pursuit of a story involving a secret lab hidden in a hospital (you know that’s not gonna end well). Trish says she’s doing it for the glory of journalism but we know she’s driven by that “center of the universe” thing. Of course, she goes way too far in pushing Jessica to investigate what happened after the accident, and the dominos keep falling from there.

There’s also a new rival for Jessica in the form of Pryce Cheng (Terry Chen), a successful investigator who’s not as smart as he thinks he is but excels at pushing everyone’s buttons. Pryce is kind of a jerk but with his penchant for being punctual we have a feeling he’s going to be right on time at some point in the series.

…and before you ask us, we have no idea whether Jessica will be “getting coffee” this time around but we’re pretty sure she’s going to be sipping on Spanada (J.R. Ramirez), and that’s not the only tall drink near to hand. Yes, my friend, you can consider the sexual tension buttons pushed as well. 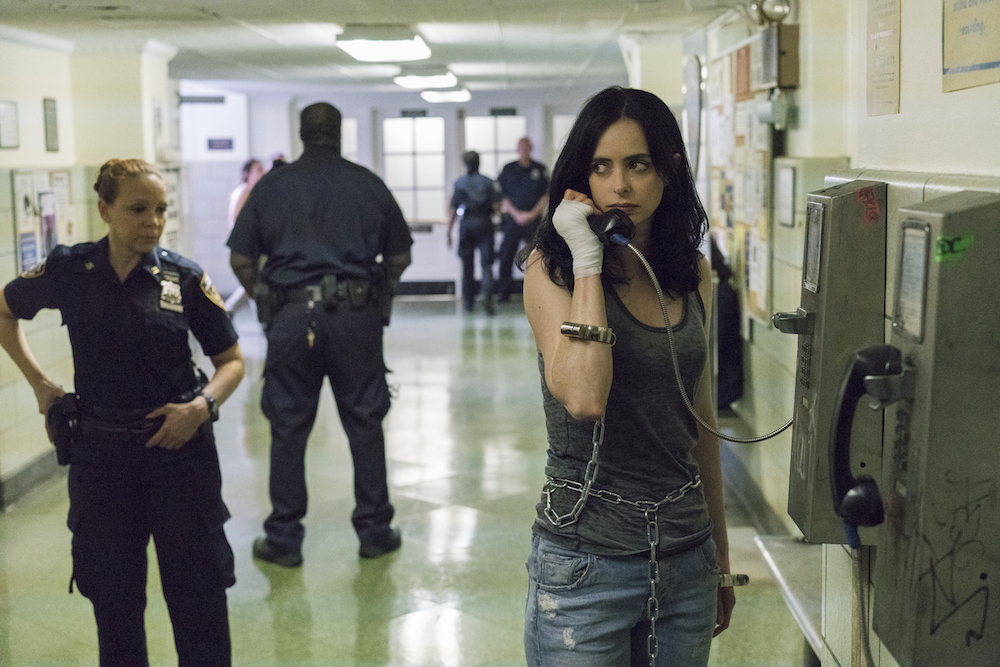 …and now for something you’ll really like. Let’s talk about the villain—who’s not the antagonist, because if anyone is antagonizing Jessica it’s Trish. The true villain of the season comes out of nowhere and then things really begin to pop. There’s nothing like a villain who can stand toe-to-toe with your hero and make them question everything they believe about themselves.

Jessica Jones is a strong series with characters who make the continuous tragedy well worth the ride. There might be a little too much hardboiled detective and not enough metahuman drama in the first five episodes. We’re also not given much of an emotional hook, but it’s clear the creators are ramping up to something. The cast, writing, cinematography, and character development are so good. The imagery has leveled up, director of photography, Manuel Billeter, adds primary blues and reds to the backgrounds while framing each shot like a comic book panel. The only drawbacks are the pacing—episodes 2 and 3 could’ve been combined—and Trish. There is an overabundance of Trish. Rachel Taylor does good work but the character’s selfish-recklessness (it’s her thing) grates on the nerves like vocal burn combined with that song you hate…on repeat.

In the end: Despite a slow start, Jessica Jones season 2 is a bombshell with a very long fuse—it burns slowly at first but then POW!

Binge the entire second season of Marvel’s Jessica Jones
on Thursday March 8 @ 3am ET – only on Netflix.