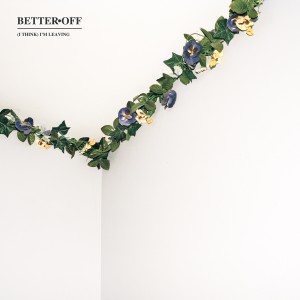 The Internet is currently rife with articles expounding an emo revival and counter-articles insisting the genre has been there all along. Regardless of which side you take, there’s no denying the recent splurge of promising emo bands. Better Off is one of the latest bands to produce their own take on a nostalgic blend of emo and punk. It’s rare for relatively unknown bands to release a full-length as their very first release; however, having played together in various Nashville-based acts, the band decided to dive right in with (I Think) I’m Leaving. The 11-track effort is a remarkable display of skill and maturity that you wouldn’t usually expect on a debut album.

While most records start off with an upbeat, energized opener, Better Off choose to open with “Hello (Blues),” a slow, melancholic tune built on acoustic guitars and reverberated vocals. The unconventional technique pays off, allowing the band’s musicianship and intelligent lyricism to shine from the very beginning. The song trajects upwards with heavy drums bolstered by the bass before culminating in higher vocals and a swell of guitars engulfing the listener. This slow-burning crescendo serves as the perfect transition into “The Price Is Never Right,” the album’s standout track. The song kicks off with a catchy, energetic riff that smoothly leads into a low, palm-muted verse reminiscent of Turnover’s latest effort. Once the chorus hits, vocalist Luke Granered’s impressive range becomes immediately apparent as he belts out “All my thoughts say / Please stay inside just today.”

“Sick, Sad, Sons” piles on melodic lines and crashing guitar parts building towards an extremely cathartic moment at the end as Granered repeatedly yells, “You’ll never find what you’re looking for.” “A Fool Walks Into a Bar and Cried Wolf” leans more towards pop punk with a brighter vibe and earnest vocals. Borrowing from their peers, “1991 (Alive)” as a whole contains a Citizen-esque sound and “Next Step Is Out the Door” features a straightforward rock riff with hints of Balance & Composure during the chorus. The latter also includes a genius depiction of teen angst: “We dripped our old age worry / Into your shortened youth.” Perpetuating the same theme common to emo music, “Living Tired” serves as the perfect disillusioned teen anthem with the quasi-arrogant line, “It’s hard to look up to anyone but me.”

Closer “Garden State of Mind” has an interesting title since the band hails from Tennessee, but it’s possible that the song serves as tribute to New Jersey, one of the original hotbeds of emo music. The song starts off as a driven emo song with tinges of Taking Back Sunday and Into It. Over It. influence before leading into an extended 7-minute instrumental outro that showcases the band’s talent and technicality once more. The musical display will be enjoyable for some, while unnecessary for others.

(I Think) I’m Leaving serves as the perfect introduction to Better Off. The record is relatively top-heavy with the strongest tracks in the beginning while the ones in the latter half start to run the risk of blending in with each other. Each song, however, displays the band’s capability in producing raw, emotive music and lyrics. Instead of just releasing an EP with their three best tracks, the band pursued a full-length instead, which is a sign of their ambition and potential for subsequent releases.