idobi Radio Announces Lineup for idobi Meltdown 2013, Begins Presale
Circa Survive and Minus the Bear to headline the first annual idobi Meltdown Festival March 9, 2013;
I Am The Avalanche, Kevin Devine, The Front Bottoms, Now, Now and more to support

WASHINGTON, DC – idobi Radio is proud to announce the lineup for the first annual idobi Meltdown Festival, taking place March 9, 2013 at The Fillmore in Washington, DC. Circa Survive and Minus The Bear  will co-headline the festival as part of their just-announced winter trek across the US. Support for the event comes from some of the strongest established and up-and-coming acts on the scene today: I Am The Avalanche, Kevin Devine, Vinnie Caruana, The Front Bottoms, Now, Now, Koji, Diamond Youth, Coasta, Laura Stevenson & The Cans, Markets & Dwellers, The Soviet, Brick+Mortar, and more to be announced!

idobi Radio has been bringing its listeners the best in alternative music since its inception in 1999. Through great original programming, creative rule, and forecasting hit music, idobi has grown to a dedicated monthly listenership of over 2.5 million. Recently certified by Triton Digital as the #11 internet radio station in the US and #16 worldwide, idobi Radio is the  most listened-to online modern rock outlet in the world. 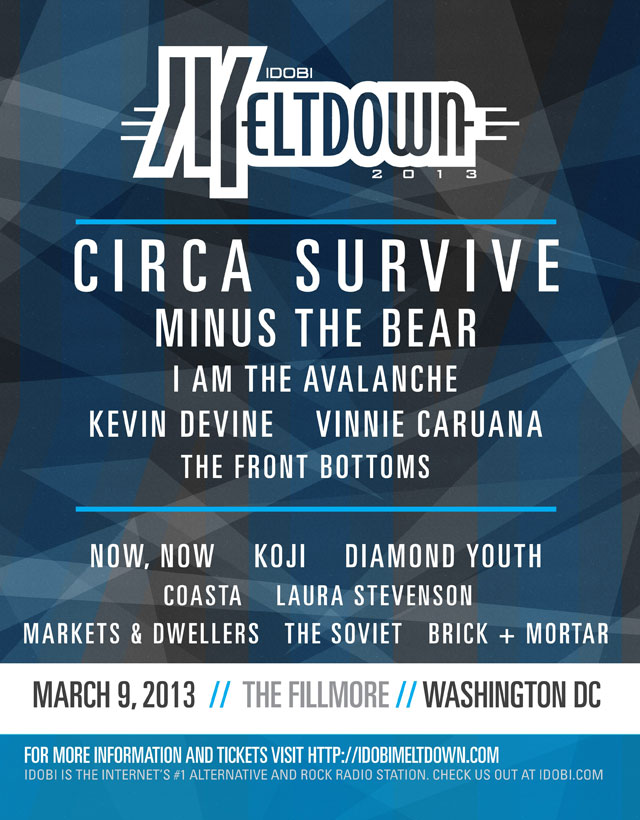