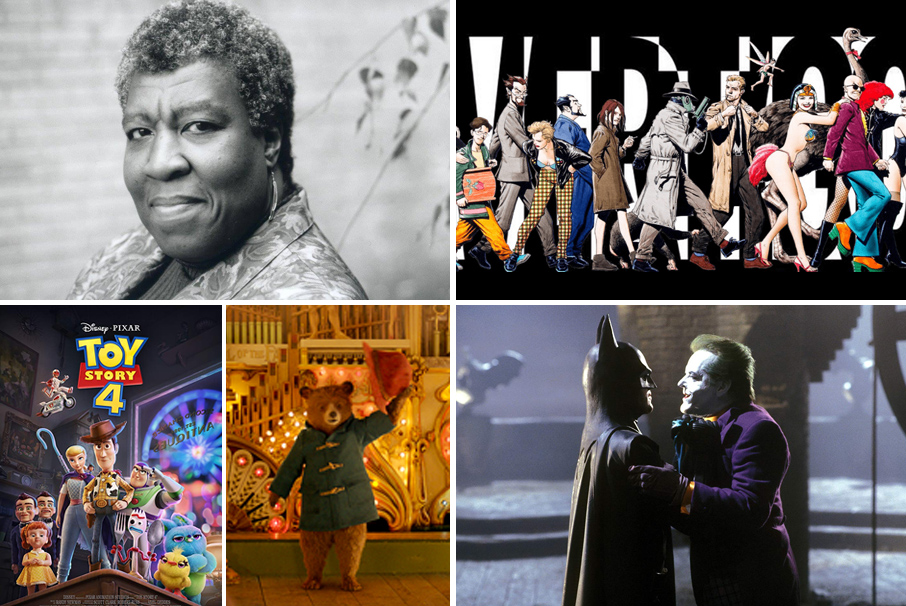 This week Geek Girl Riot teams up with Fantastic Forum for an entertainment news episode of epic proportions!

The News According to Geek Girl Riot
Sherin and Alex give you an update on what’s been happening in the world. They share some important messages about the current political climate and humanitarian crisis, before shouting out the heroes that are inspiring them onscreen and on the streets.

The detention facilities immigrant children are being held in are disgusting and a breach of human rights. Help to stop this horrific injustice by calling your U.S. representatives at 202-225-3121 and your U.S. senators at 202-224-3121.

Celebrating Octavia Butler + Mourning Vertigo Comics
The Fantastic Forum team join us, hosted by Ulysses E. Campbell and featuring Rioters Sherin Nicole and Drew Bittner along with The Great Geek Refuge’s Mike Lunsford. The crew raise a glass to Octavia Butler on the anniversary of her birth—the legendary writer would have been 72. Then they discuss the Vertigo shutdown and why DC is reshuffling its imprints. There’s some confusion and a lot of heartbreak over this news and the FF team break down their feelings. Of course, they can’t talk about Vertigo without shouting out its creator Karen Berger and longtime executive editor Shelly Bond. Cheers to them!

Holy Anniversary, Batman!
It’s been 30 years since the premiere of Tim Burton’s Batman starring Michael Keaton and Jack Nicholson. The crew talk about the film’s impact on comic book adaptations three decades on. Sherin also shares her dream casting for a Batman Beyond live-action (make it happen DC!).

Everlane is all about premium essentials made from the finest materials—laid out with transparent pricing—to make sure you look good and feel good. And our special deal is going to make you feel even better! Brought to you by Everlane. Check out our personalized collection at everlane.com/ggriot. Plus, you’ll get free shipping on your first order!