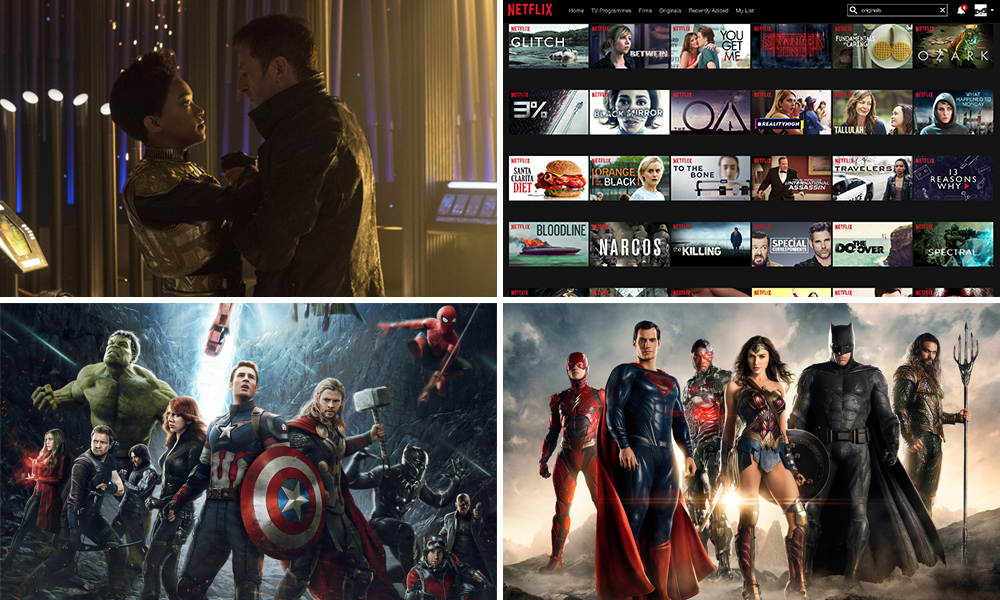 We’re back with a new episode of Geek Girl Riot, where the three rioteers Sherin Nicole, Philip Jean-Pierre, and Alex Bear join forces to take on a trio of gigantic topics: Star Trek: Discovery, Marvel Cinematic Universe vs. DC Extended Universe, and Netflix.

Mirror, Mirror, in the Verse
First up, Star Trek: Discovery has been capturing our cold Vulcan hearts for a while now, and we’ve gotta talk about it. Sherin and Philip try and convince Alex to watch the show, and Sherin accidentally reveals her prescient powers by predicting a few theories (which may have already come true…somewhere out there she’s doing her “toldja so” dance).

MCU vs DCEU: Who’s Got the Love?
Then we’re beaming up into the Marvel and DC universes, to discuss the differences between the two—the biggest being…heart. Speaking of prescience, soon after recording the episode, this Adweek article reported a study that suggests Marvel beats DC at the box office because fans emotionally connect with its heroes. True story. Disclaimer: As comic book fans, we love both Marvel and DC in different ways—we just want y’all to do better, son.

The Highs and Lows, Keeping One Eye Open, Clockin’ the [Shows]…
Finally, the trio tackle Netflix. The binge-watch kingdom has put out so many amazing original shows…but some of the more recent properties missed the high bar they’ve set. The first step to recovery is admitting the problem, so Sherin, Philip, and Alex dig into the most shocking Netflix watches of the year, offer up their take on how to improve, and shout out the shows they’re loving. We want more American Vandals and less Death Notes (seriously, can you not). We want more quality, less quantity. We want more faithful adaptations—or originals instead. We want more, Netflix.

The show closes with a powerful poem that gives us one moment to be still, by Pablo Neruda. You can hear it in the podcast, and read it below.

Tune in to Geek Girl Riot on idobi Radio every Tuesday at 11pm ET / 8pm PT for your dose of late-night geekery from our team of rioters. ‘Til next time, catch Star Trek: Discovery on CBS All Access every Sunday, and see the list of movies and shows our Rioters discussed this week:

Now we will count to twelve
and we will all keep still.

For once on the face of the earth,
let’s not speak in any language;
let’s stop for one second,
and not move our arms so much.

It would be an exotic moment
without rush, without engines;
we would all be together
in a sudden strangeness.

Fisherman in the cold sea
would not harm whales
and the man gathering salt
would not look at his hurt hands.

Those who prepare green wars,
wars with gas, wars with fire,
victories with no survivors,
would put on clean clothes
and walk about with their brothers
in the shade, doing nothing.

What I want should not be confused
with total inactivity.
Life is what it is about;
I want no truck with death.

If we were not so single-minded
about keeping our lives moving,
and for once could do nothing,
perhaps a huge silence
might interrupt this sadness
of never understanding ourselves
and of threatening ourselves with death.
Perhaps the earth can teach us
as when everything seems dead
and later proves to be alive.

Now I’ll count up to twelve
and you keep quiet and I will go.