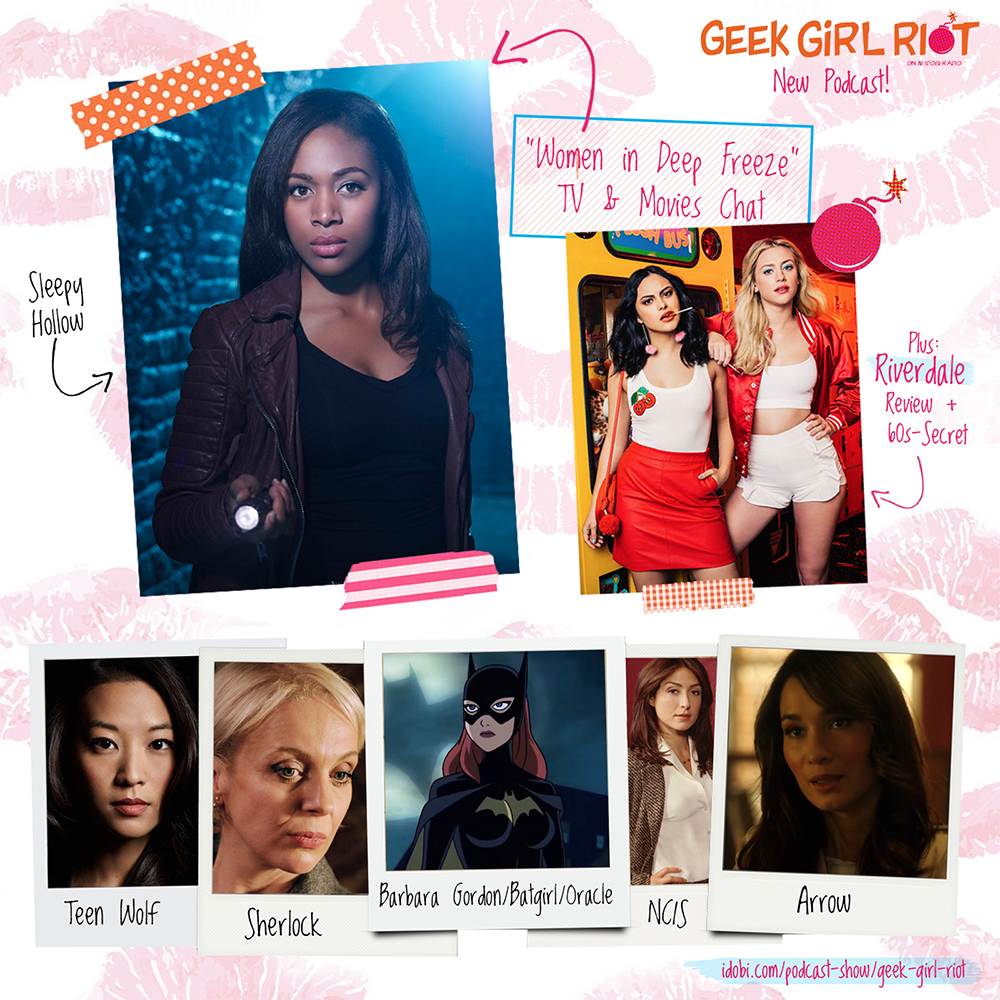 This week on Geek Girl Riot we’re heading to Riverdale! This is a show we’re absolutely loving, based on the wonderful world of Archie comics. Hear Renee’s eyebrow-raising take on the CW show, followed by a 60-second Secret(s) from Day about the history behind some of the Easter eggs, and the story behind Jughead’s t-shirt.

Brr. Did you notice that? The temperature just dropped sub-zero. That’s because on this episode, we’re taking a trip to the fridge—not just to cool off after a very heated rant, but because our main topic lives there. The refrigeration of female characters has been happening ever since storytelling was born, and yet here we are in modern day, forced to ask: Why, oh why is this still relevant? Sparked by an essay and list from Gail Simone called ‘Women in Refrigerators’, today’s conversation digs into all the times female characters have been tossed aside in TV shows and movies (and by tossed aside, we’re talking brutally murdered, raped, attacked, and generally mistreated), for no reason other than to further the journey of the male protagonist. Put on an extra sweater and buckle up folks, because Sherin, Day, Erin, and Soma are serving up some cold hard truths and it’s about to get real chilly in here.

If you haven’t heard, Geek Girl Riot is now on idobi Radio! Tune in every Tuesday at midnight (aka Wednesday morning) for your dose of late-night geekery from our team of rioters. For now, you can find Day’s 60-second Secret transcript below, along with a review of Riverdale from Renee!

Hi, this is Day with your 60 Second Secret.

Today, I want to talk about the television series “Riverdale.” For those not familiar, it stars the cast of one of the longest running comicsArchie Comics.   We get Archie and Veronica, Betty and Judghead and Moose.  All of them and more.

Roberto Aguirre-Sacasa, who led development on Riverdale, did a lot of work not only on updating the comic, but making sure this series has some great legs. He created a very enticing variant: Afterlife with Archie which has a much darker tone.

Although not zombie-filled and supernaturally linked, Riverdale, definitely has a darker and more intense feeling, though the original Archie comics characters are still evident, just updated for a modern audience.

I love love love the Twin Peaks feel of it. In fact, there even is a similar sign as you enter Riverdale, just as from Twin Peaks.  “Welcome to Riverdale, the town with Pep!”  In addition, Aguirre-Sacasa has made no mystery out of the fact that Lynch’s Twin Peaks inspired Riverdale.

Now, if you’re wondering about the “Town with Pep” language, that is an easter egg relating to the comic. Archie Andrews would make his debut as a lead character in Pep Comics #22, in 1941.

Cool eh? But there is one more Secret that I want to share. With so many folks just coming to the show who might not know the history, I wanted to give you this:

Jughead is a great character. We know about his eating, his hat, his dog “Hot dog” and, in this version, his t-shirt with the letter “S.”  It’s also on his laptop.

Now officially, the ‘S’ is never explained in the comics. BUT according to Archie creator artist Bob Montana, the S refers to Skunk Hill in Massachusetts where he went to school, which he turned into Squirrel Hill. And then combined it with his elementary school athletic team called the Tigers. The S stands for “‘Squirrel Hill Independent Tigers.’ “ I guess he didn’t want jughead to have SHIT on his sweater

And that’s it for this week’s Sixty Second Secret. I’m your host Day Al-Mohamed for Geek Girl Riot.

Basically: Riverdale is Archie only better (with a little David Lynch thrown in)!

So, Season 1 of Riverdale (the new CW series based on Archie Comics) has just dropped on Netflix—and it is worth your time.

Gone are the days of Betty and Veronica battling it out over do-gooder Archie, against a backdrop of high school antics. No, today’s Riverdale is full on soap opera fabulousness.  Love interests play second fiddle to a murder mystery, family rivalries, and very modern day concerns.

We’ve got an Archie ready for primetime (and a new Reggie too!)—cell phones and sex, drugs and drama. Riverdale starts with a bang, quite literally, and keeps its foot on the gas. The nicest thing? The writers give as much voice to the female characters as they do the men in this series.  It isn’t the ARCHIE SHOW; it truly is Riverdale! Every resident, every relationship—parents, lovers, friends, enemies. Everyone has a stake in Riverdale, everyone has an impact…and everyone has a secret.

Using Jughead as the framework for the story, casting him in the role of blogger and outsider, was a stroke of genius. It makes the goofy pal of the old Archie seem like a mask that was always hiding this deeper, haunted persona.

Not everything is grand…I, for one, can’t get over Archie’s eyebrows. In every scene I find myself wondering if they are real. No shade here, just honest reviewing.  And some of the choices he makes, while understandable are still a little too do-gooder for me.

And Cheryl Blossom is a girl crying out for some professional intervention, but even when the given the chance to get it for her no one does.  The script has her laying it on a bit thick…but strangely they treat Ethel Muggs (who is having crises after crises, as well) with a lot less over the top teen drama, and I think, handle it with a bit more finesse and care.

In the end: With the tip of the hat to the old Archie in a few places…a wink and nod to Tom Waters…and an actual conversation between Betty and Veronica that references the Bechdel Test,  this series has a lot going for it.  It is worth the time if you’ve got a binge craving coming on and you want some really awesome drama and some kick ass women.