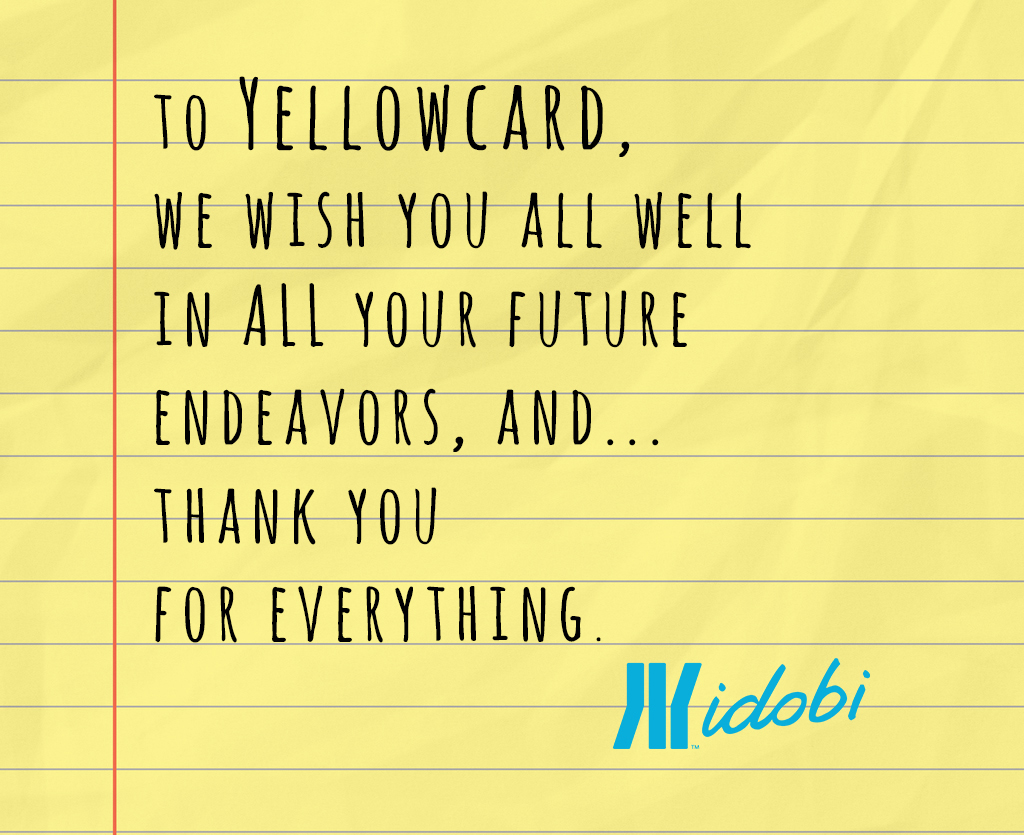 We were afraid it was an omen when they dropped their new single this morning… Yellowcard have decided to call it quits after their upcoming album and a farewell tour. As a fan of Yellowcard for over a decade, this news is completely heartbreaking; growing up with this band has helped to shape who I am as a person, and I’ve always turned to their music for both the hard times in my life, and also the good ones. And as a fan, all I can say right now in this state of shock is: to Yellowcard, on behalf of idobi, we wish you all well in your future endeavors, and thank you for everything.

The band’s website is currently down, but read a statement from the band below. You can also listen to their new single “Rest In Peace” below, check out dates from their farewell tour, and pre-order their final self-titled album here—it’s out September 30th.

Putting this into words hasn’t been easy. When saying farewell, it is hard to know where to start, especially when there are so many reasons not to say it, but the time has come to share this news. After countless discussions and months of thought, we have decided that it is time for Yellowcard to come to an end. This will be our last album and our final world tour.

The decision was an incredibly difficult one for us to make. We considered so many things – our families, our health, our future endeavors. In the end we realized that this was the right time to step away and preserve the legacy and integrity of the band. It is with you, the fans in mind, that this decision was made, We wanted to have the chance to share our farewell with as many fans around the world as we could, and now is the right time to do just that

We went into this record knowing it would be the last, which is why we chose to have Ryan Key and Ryan Mendez produce it. The motivation behind this was to make sure these songs came from a place that was deeply rooted in us. We wanted to push ourselves to create a lasting finale for this incredible story on our own. It is also why we chose to self-title the album. We were lucky to still have our friend and mentor, Neal Avron, on board as Executive Producer and mixer and we’ve made one of the strongest records of our career and a fitting final creative piece.

Once this final chapter for Yellowcard comes to a close, we will all be heading in new directions in our lives, but these memories will never leave us. We can only hope that the memories we have made together with you will stay in your hearts as well You have stood by us through all of the highs and lows on this unbelievable journey.

We will be forever grateful to Yellowcard fans all over the world for the opportunities you have given us. We have played shows for nearly two decades on six continents, and had the chance to keep recording the music we love year after year. While it is with sadness that we say goodbye, it is with gratitude and amazement that we look back on a career we can be proud of, and were so very lucky to have had.

Please come and join us on our last trip around the globe. We hope to share this final record and tour with each and every one of you.

“I won’t be with you, but I won’t be far away and this is goodbye.” 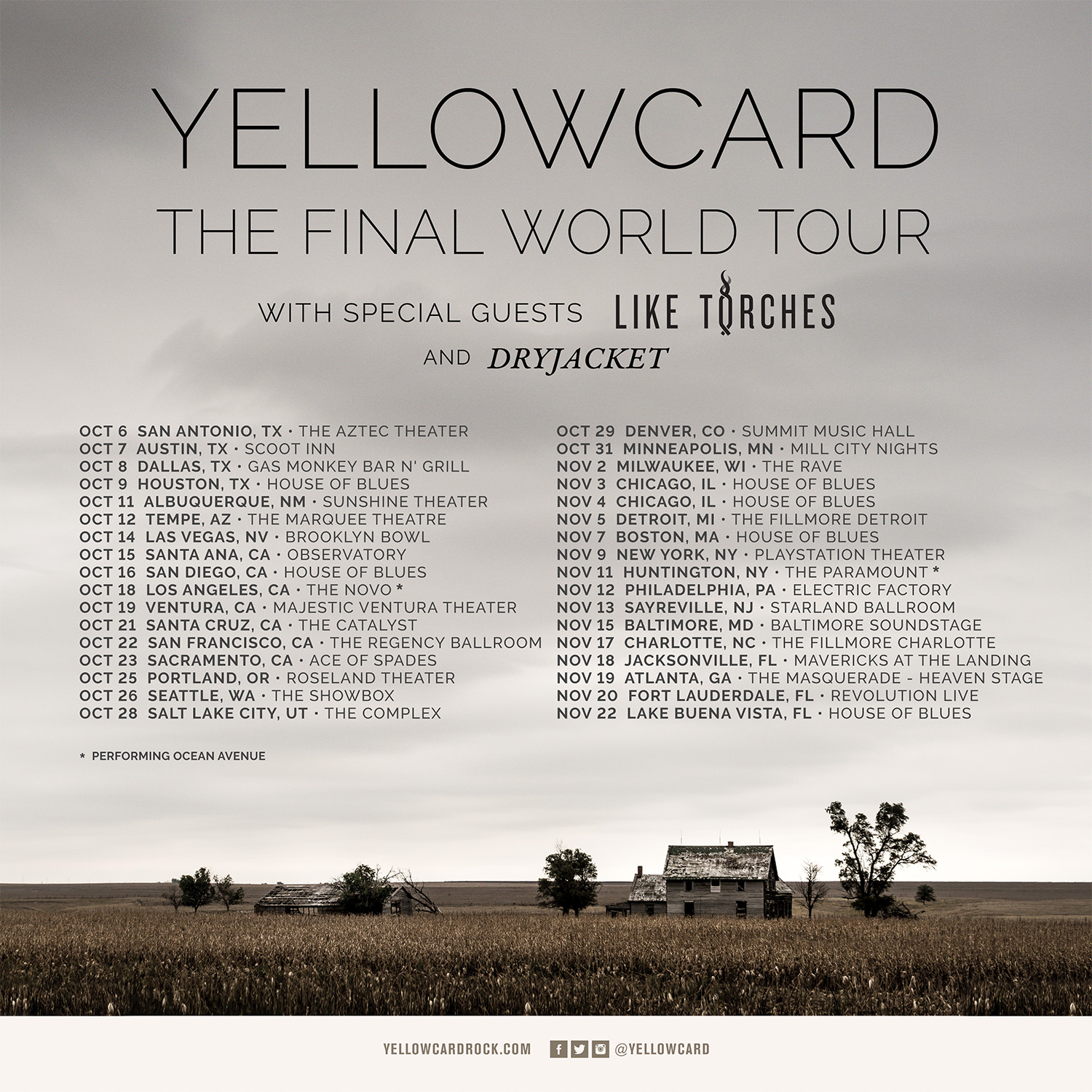 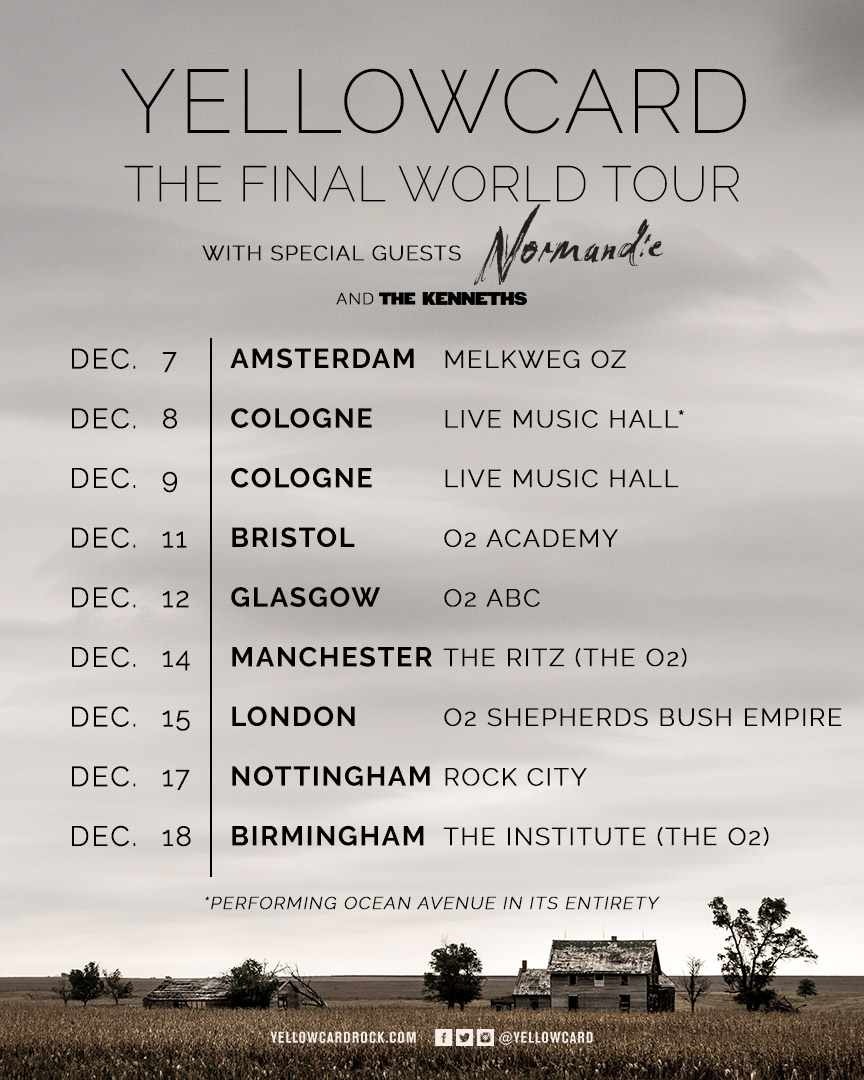