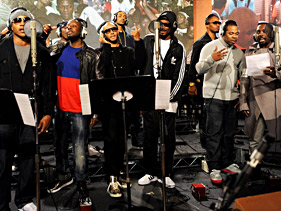 In 1985, Justin Bieber was nine years from being born, Auto-Tune was 12 years from being invented, and Lil Wayne turned 3. Yet all three are prominent on “We are the World: 25 for Haiti,” a remake of the 1985 charity single that will benefit relief efforts in earthquake-stricken Haiti.

The updated version of “We are the World” not only has a completely different cast than its predecessor – only the late Michael Jackson remains, with his sister Janet singing along to his vocal tracks from the original – its sound is very current, with Auto-Tune flavoring many of the singers’ voices and hip-hop verses being added to the proceedings. Lady Gaga producer RedOne and Haitian native Wyclef Jean assisted original “We are the World” producer Quincy Jones on production duties.

The song opens with Bieber, who steps in for “We are the World” co-writer Lionel Richie. From there, Nicole Scherzinger and Jennifer Hudson harmonize, and Jennifer Nettles of Sugarland drops in. Despite the different faces, the overall feel is similar to the original’s, with Hudson turning in a powerhouse performance on verses originally performed by Stevie Wonder.

It’s on the second repetition of the chorus when the song begins to take on a life of its own, with Wyclef singing the song’s title as translated into Creole, which is one of Haiti’s official languages. From there, Maroon 5’s Adam Levine channels Stevie Wonder.

The Wonder similarities are only underscored by another Michael Jackson appearance, whose bridge, when he sings, “When you’re down and out, and there seems no hope at all,” remains intact.

The chorus of singers and actors then gets soft, with ad-libbed verses by Scherzinger, Nick Jonas, Melanie Fiona, Tony Bennett, and The Fray’s Isaac Slade recalling the verses provided by the likes of Bruce Springsteen and James Ingram in 1985. And then Lil Wayne reprises Bob Dylan’s verse, with Carlos Santana furiously playing guitar behind him. In addition to Santana, Australian guitarist Orianthi lends her riffing skills to the track.

Pink, Akon, and T-Pain add ad-libs as well, and then another callback to 1985 swoops in as Jamie    Foxx channels the late Ray Charles, who was at the session 25 years ago. Foxx won the 2004 Best Actor Oscar for his portrayal of Charles in the film “Ray.”

Hip-hop is a defining part of the pop landscape in 2010, and the new “We are the World” reflects that. A Will.I.Am-penned verse is performed by a host of rappers, including LL Cool J, Busta Rhymes, and Kanye West. Will and Kanye also have solo turns on the song, with each adding brief freestyles. The song ends with Wyclef emotionally toasting his homeland.

An abbreviated version of the Paul Haggis-directed “We are the World: 25 for Haiti” video premiered during the Winter Olympics broadcast on NBC, but the full, almost-seven-minute version of the song is available for purchase on iTunes, and the official We are the World YouTube channel is streaming the video. The full video will air on television around the world on Saturday.