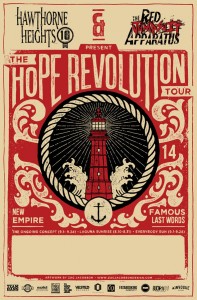 To Write Love On Her Arms has announced the lineup for “The Hope Revolution Tour”. Hawthorne Heights and Red Jumpsuit Apparatus will co-headline the shows, with supporting acts New Empire and Famous Last Words. Laguna Sunrise, The Ongoing Concept and Everybody Run will jump on the tour for select dates throughout the trek. Dates and ticket information are set to be announced soon.

The tour kicks off in August with dates, cities, and ticketing information to be announced soon.
The Hope Revolution Tour coincides with the 10 year anniversary of Hawthorne Heights’ breakthrough album “The Silence In Black and White”, which the band will be performing in its entirety.
In 2013 The Red Jumpsuit Apparatus also celebrated their 10th anniversary as a band.

The tour is put on by non-profit organization TWLOHA, a company that provides support to those suffering with issues such as depression and anxiety. This is what makes “The Hope Revolution Tour” more than just another string of concerts. Your ticket purchase will help the organization in making the world a better place, one happier person at a time.