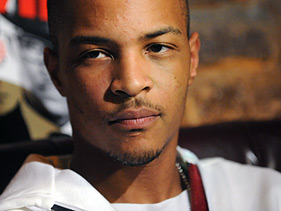 ATLANTA – A Northern Georgia District judge sentenced T.I. to one year and one day in prison on felony weapons charges Friday, calling the rapper’s plea deal “experimental” but a success.

Judge Charles Pannell, Jr. told the rapper he had more than exceeded the court’s expectations, and he hoped his case would inspire similar plea deals.

As a part of the plea deal Clifford “T.I.” Harri) struck last March, the year-and-a-day sentence was expected. The rapper is also required to complete 1,000 hours of community service before turning himself in, and another 500 hours after completing his sentence. He also must pay a $100,000 fine.

Tip is scheduled to report to prison voluntarily within the next six to eight weeks. However, the judge acknowledged that the rapper has agreed-upon commitments what will not allow him to enter prison before May 19.

T.I., in a charcoal-grey suit and matching black dress shirt and tie, delivered a sober speech to the judge. His 10-minute speech details his misguided youth, the death of his best friend Philant Johnson in 2006, and his desire to use his mistakes for a positive end.

“Your honor, pehaps if I didn’t make the mistakes that I did as a youth, maybe I could have armed myself legally,” he said.

Judge Pannell listened to each supporter and graciously thanked T.I. for successfully meeting the terms of his plea deal and the conditions of his bond.

Several times throughout his closing remarks, Judge Pannell called T.I.’s arrangement “experimental.” He singled out the U.S. Attorney responsible for the deal and joked, “If this didn’t work, I’d send you to jail, Mr. Harris – but the attorney, I’d probably throw him out the 23rd-floor window.” The remark drew laughs and Tip smiled as well.

T.I. thanked the government legal team for their “vision” and told the courtroom that pleasing the judge and lawyers makes him as happy as him trying to please his family.

The rapper must agree on meeting a number of conditions after his release. He will be required to submit to an audit, drug counseling and he will be subjected to home confinement for 60 days.

A beaming T.I. celebrated with his family immediately afterward, before court officers ordered people to leave the floor. Tip held a brief press conference after inside the courthouse lobby, thanking his family and supporters.