SAYREVILLE, N.J. — There was one truth apparent while walking through the merchandise area one hour after the doors opened at the Starland Ballroom last Wednesday evening: the crowd was ready for all that was to come. 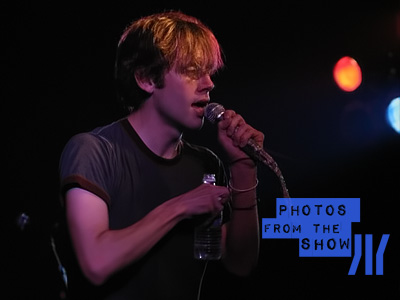 What was surely one of the largest audiences the central Jersey venue has ever seen was packed between the four walls that acted as the container for a veritable powder keg of sound and raw energy.  And this audience was not composed of stereotypically ravenous concertgoing youths; instead, it was an older crowd, which is to be expected when all of the bands represented (Boy Sets Fire, Converge, Dillinger Escape Plan, Glassjaw, Thursday) trace their roots back at least 12 years.

United Nations was originally a side project started by Thursday singer Geoff Rickly and Glassjaw singer Daryl Palumbo, in addition to members of Converge and The Number 12 Looks Like You.  In its fourth live appearance together this grind-core super group was able to give the audience a very talented performance despite Palumbo’s somewhat mysterious absence. The skillful Rickly later confirmed on stage that the Long Island native was hard at work with Glassjaw and had little time to commit to this side project.  Notwithstanding, the vocals seemed to display a bit more of the melody Thursday is known for than what was heard on its own self-titled debut record. This prompted the crowd reaction to be mostly directed towards the band’s audibly sick vocalist, who seemed to have reworked the songs to sound like a rougher, more intense version of Thursday’s craft. While the songs did not elicit as much of a reaction from concertgoers as did the sound itself, the crowd seemed to enjoy the 20-minute set.

After a longer than usual wait for an opening band the lights went down and Dillinger Escape Plan, hailing locally from Morris Plains, N.J., took the stage to the cheering and delight of a legion of fans all making sure to be front and center for the madness that was about to ensue. From the beginning it was obvious that everyone’s ears were in for a severe beating — the near-screeching vocals (in lieu of Greg Puciato’s signature screaming) ensured this despite some intermittent interruptions in the vocals.  Regardless, this band — and more importantly its physically intimidating lead singer — put on a recklessly entertaining performance.  There was no rest for the weary even between songs since the guitarist would continue to play a chord or two of simple noise as a segue.

The not-so-hardcore fans seemed a bit surprised when there was a piano intro to a song in the middle of the set. The confusion was understandable, as it was not clear if there was actually a piano on stage.

“Even the band members need a break from themselves,” Eric Rivera, a fan from River Vale, N.J., told idobi.

But after that short interlude the band was back up to its usual tricks when one of its most metal moments to occur live happened during the set closer, “43-percent Burned.” When Starland Ballroom staff decided Dillinger Escape Plan’s time was up, turned off the stage light and brought down the projector screen that occupies the stage between sets for advertisements, the band decided it was not done. Instead of being polite and walking off stage, it continued playing even after all the vocals were turned off to the delight of everyone right down to the soundboard manager. The crowd, by now whipped into frenzy by the energy and love this band directed toward them, kept building up its excitement for what was coming next. A mere 15 minutes later Glassjaw took the stage.

Around these parts, Daryl Palumbo is more than a certified rock star — he and his band are the object of popular worship.  Everyone does whatever they can to pay tribute to him and the two albums his band has released in the first half of the decade.  But there were two songs from the set that have not yet found a home in the form of a new record. “(You Think You’re) John Fucking Lennon” and “Babe”   enthralled the crowd that the four-piece band entertained with album-quality sound. And as the rest of the band’s members remained stationary for the most part, Palumbo pranced all over the stage in a seemingly seizure-like state of slam dancing up against the massive pits that seemed to be one step ahead of him at every turn.

The band took several breaks between songs, each being a sort of momentary calm before the storm that came with each breath of the singer, strum of the guitar, and collision between the drumstick and the snare. But there were no true lulls in the set list; every track seemed to be a fan favorite, and there was little time for the excitement after one song to end before the excitement for the next one began. And this time, the insanity of the crowd was genuinely directed towards the band’s ability to sing every word that Palumbo screamed instead of being a primal reaction similar to the one provoked by Dillinger’s onstage antics. And just as the crowd had been loyal to the band throughout its set, once Glassjaw left the stage it seemed as if the venue that had appeared to be filled beyond capacity finally thinned out a bit.

This was billed as a holiday show, and Thursday, the next act, was certainly in a giving mood.

Thursday kicked it off with “Autobiography of a Nation,” the first of five tracks from 2001’s Full Collapse.

At the outset of the show Rickly said that the band would be playing songs directed at the fans that have “been with them over the past ten years and would not try to play too many new ones.”

In keeping with his pledge, the live performance showcased only two songs from 2009’s Common Existence while the remainder of the set consisted of material released prior to 2007.

Thursday took many breaks to thank the crowd, revel in how much it loved New Jersey and wonder why it would ever leave on tour if it could sell out the Starland Ballroom.

Midway through the set Rickly addressed the earlier United Nations performance and Palumbo’s absence, asking the crowd, “I’d rather get a new Glassjaw record than hear him play guitar on a UN record, wouldn’t you?”

The lead singer was in such a playful mood that he discussed the merits of the MTV show “Jersey Shore,” dedicating “At This Velocity” to Mike “The Situation” Sorrentino and Nicole “Snookie” Polizzi and embarking on an impassioned speech about treating women with respect and protecting them. Thursday then closed the set with its only single to make the Billboard 200 to date, “Signals Over the Air” and the screamo masterpiece “Cross Out The Eyes” before thanking the crowd and walking offstage with big smiles. Chants of “Jet Black! Jet Black!” immediately filled the air, and after a few minutes the band returned to satisfy the hungry masses with the very appropriate “Jet Black New Year.”

And with that, Thursday thanked the crowd one last time and wished everyone a safe new year so that Rickly could go home to rest his overworked vocal chords.