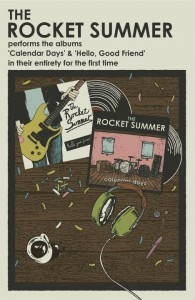 The Rocket Summer will be performing  Calendar Days  and Hello, Good Friend  in their entirety for the first time ever at six special shows this December. Dates and venues are being announced daily on the band’s Facebook page, with the first show confirmed for December 1st at The Social in Orlando, FL. A video announcement can be seen below.