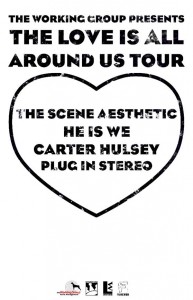 The Working Group  has announced  The Love Is All Around Us Tour, which features the acoustic indie pop of Seattle, WA based headliner The Scene Aesthetic.Support comes from Tacoma, WA pop duo He Is We, Joplin, MO singer-songwriter Carter Hulsey and Plug in Stereo, the alter-ego of 17-year-old Portland, OR based multi-instrumentalist Trevor Dahl. Special guests will also be making appearances on select dates.

The Scene Aesthetic will be out in support of a brand new deluxe edition of their recent Brother release. The new expanded version, titled Brother+Sister, will feature 6 new songs and will be available nationwide on March 1.

He is We will be touring behind their latest release My Forever. Debuting at #3 on  iTunes’s Pop Album Chart and #6 on Billboard’s Heatseekers Album Chart, My Forever was released digitally in late 2010 and has been winning accolades in media.

Carter Hulsey’s A Note In Your Pocket is available now. Plug in Stereo’s debut full length Nothing To Something will be out this spring. He is touring in support of the recently released Plans EP.

Tour dates and more information can be found here.

Tags: Carter Hulsey, He is We, Plug In Stereo, The Scene Aesthetic