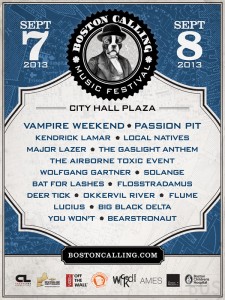 The second edition of the Boston Calling festival will be taking place in City Hall Plaza on September 7th and 8th. The full lineup can be found on the admat and a portion of all proceeds from the festival will benefit the Music Therapy Program at the Boston Children’s Hospital.

After closing out its first two-day festival last night with enormous success, and to a sold out crowd, Boston Calling, announces a second edition, which will take place just a few months from now, September 7 and 8, 2013, at the city’s historic City Hall Plaza [One City Hall Square, Boston, Massachusetts]. Last night, just before headliner The National played an unforgettable set on the Main Stage, Aaron Dessner and Boston Calling announced that it will return to City Hall Plaza in September with Vampire Weekend and Passion Pit headlining. Boston Calling is produced by Crash Line Productions in partnership with Bowery Presents. Early bird tickets will go on sale Friday May 31, 2013 at 10AM EST at www.bostoncalling.com, www.ticketmaster.com, and with no service fee at The Sinclair and Royale box offices (52 Church Street, Cambridge MA; 279 Tremont Street Boston, MA).
September nails the festival offerings with its diversity of 18 live performances, which, as with the hit May 2013 line-up, were co-curated by Aaron Dessner, acclaimed songwriter and multi-instrumentalist of The National. The festival will be headlined by Vampire Weekend, whose album, Modern Vampires of the City, is currently topping the charts, and the internationally acclaimed yet locally originated Passion Pit guarantees a dance party. Further daring fans not to dance, are Flosstradamus, Major Lazer and Boston’s Bearstronaut. Meanwhile Local Natives, The Gaslight Anthem, The Airborne Toxic Event, and Providence’s Deer Tick offer plenty of reasons to rock out, and two of the country’s leading hip-hop and r&b artists, Kendrick Lamar and Solange will no doubt seduce fans.“There was no better time for us to announce Boston Calling’s September return than when we could share it with the fans of our very first festival,” says Crash Line Co-Founder Brian Appel, “we’re so appreciative of and motivated by all of the support we have received from fans, artists and the city. It’s an honor to bring Boston Calling back to our city.” Speaking to the lineup, Crash Line Co-Founder Mike Snow adds, “we love the diversity, energy, and innovation of the September bill, it feels like one big, post-summer Boston party.”Perched on a hill in Downtown Boston and with the city’s skyscrapers encircling its grounds, Boston Calling’s locale at City Hall Plaza will offer the ideal urban festival vibe. As with May 2013’s festival, producers will enhance this environment with two performance stages, two beer gardens, a food pavilion comprised of food trucks and local food vendors, and world-class lighting and design by locally based Party by Design. Boston Calling will also feature a VIP component whereby VIP ticketholders will have access to City Hall Courtyard, a 25,000 square foot, second-floor Mezzanine offering prime views of the main stage as well as specially curated menus and luxurious amenities.

A portion of all proceeds from Boston Calling will go to the Music Therapy Program at Boston Children’s Hospital — the program helps patients cope during their hospitalization by bringing the joy of music to their bedsides.