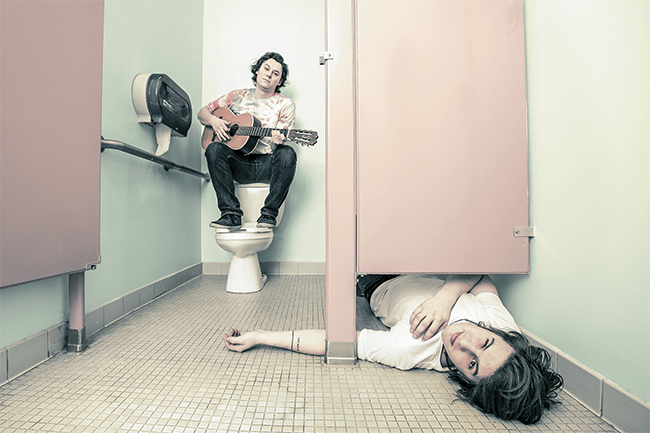 Exactly one year after The Front Bottoms released their record Talon of The Hawk, the band have announced the upcoming release of the Rose EP. You can pre-order the EP here and read the full press release below.

“These are the songs that people ask for when we’re on tour,” says vocalist/guitarist Brian Sella of The Front Bottoms, about their new six-track Rose EP (Bar/None Records); “They’re songs that were either we’ve played live at shows or we’ve had kicking around that we couldn’t let go of.” A collection of some of the best tracks of their career so far, named after drummer Mathew Uychich’s grandmother Rosemary, Rose marks the first in a series of EPs named after their grandmothers which they plan on releasing in the future. “These songs were also Mat’s grandmother Rosemary’s favorite songs,” he explains. “So it was kinda fittin that we named this EP Rose.” Launching the CD with the crowd pleaser “Flying Model Rockets,” it kicks off with an epic and bombastic bang. Epic and conversational, the track propels listeners through their trademark clever lyrics have started massive sing-alongs at their live shows. “Lipstick Covered Magnet” and “Be Nice To Me” continue the punk thematics while the moody and introspective“Awkward Conversations” projects the tension of a relationship on the verge of collapse. The immediate smiling infectiousness of “12 Feet Deep” posits the story right in the middle of that precarious time between high school and college when kids have to confront a wider world. The first song and video released “Jim Bogart” puts Brian in the uneviable position of pining for a girl who doesn’t reciprocate his feelings.

The band have also released a video for the song “Jim Bogart,” which is from the upcoming EP.