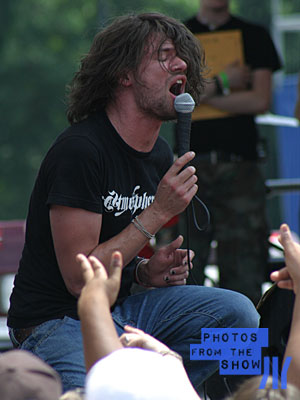 For the first time in seven years, Shaun Cooper and John Nolan shared the stage with the rest of the Tell All Your Friends-era Taking Back Sunday crew, and neither one of them looked out of place. In addition, every band member and instrument sounded on point.

The most obvious difference between this crew and the band that brought songs such as “Cute Without the ‘E’” and “You’re So Last Summer” to the masses was the bandmates’ facial hair.   Lazzara and Nolan were sporting some serious scruff that set them apart from the skinny kids everyone knew in 2002.

One third of the set list consisted of material created by the original lineup, giving the evening a sort of throwback feeling. This emotion  was accented by Kenny Vasoli, lead singer of opening band Person L. Vasoli is the former frontman of pop-emo act The Starting Line, a group that also originated in the northeast in 1999.

“These guys haven’t been together in almost seven years and they didn’t miss a beat,” said Michelle Kivlehan, a 23-year-old fan from River Edge, N.J. “This performance was beyond what I could have hoped for!”

In addition to playing material spanning the Taking Back Sunday discography, two new tunes premiered and the entire band performed a well-received rendition of “Existentialism on Prom Night”. (This track was a hit single for Straylight Run, the project that Nolan and Cooper originally left the band to form.)

The band ended the set with two classics, “Great Romances of the 20th  Century” and “Timberwolves at New Jersey” as well as with fan favorite “MakeDamnSure”. The band then cleared the stage, but the crowd was hungry for more from the Long Island natives.

As the lights faded, chants of “T-B-S! T-B-S!” transformed into “U-S-A! U-S-A!” to reflect the presence of the oversized American flag that acted as the backdrop to the band’s 17-song set. The encore began with a simple stage setup, consisting of Lazzara holding an acoustic guitar and Nolan behind the piano he had been massaging all evening.

As the band’s lead singer came on stage, he exclaimed that ever since he saw the cover for The Boss’s Born in the U.S.A, he wanted something like that behind him. He then began strumming the introductory chords to Bruce Springsteen’s “The River” and “Atlantic City”. A chorus of boos that followed confused and disheartened the singer who had expected a better response from fans in Springsteen’s home state. Taking Back Sunday ended the set playing a song “we promised ourselves we never would” and tore into “There’s No ‘I’ in Team”, to the delight of the delirious 2,500 in attendance.

This atmosphere, while nostalgic for some, was further complemented by the sold-out Starland Ballroom crowd singing every word to “Sweetness” by Jimmy Eat World as it blasted through the speakers between bands. As is standard for a performance of this magnitude, the entire pit-area crowd made the push to the front. This began a chain of unusually rough behavior throughout the venue, resulting in the ejection of more than half a dozen concertgoers.

Most fans exited the venue fully satisfied, however, and headed home to tell all of their friends about it.