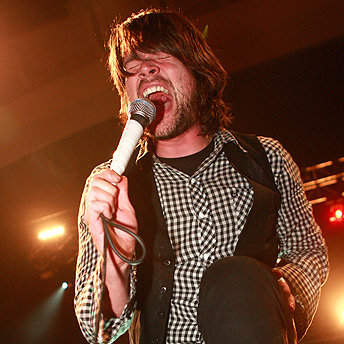 For frontman Adam Lazarra, the addition of guitarist Matt Fazzi last spring has given the five-piece a wildly fresh perspective.

Bassist Matt Rubano agrees that the band is embracing a new genre with its new release.

“The idea that we’ve really embraced on this record is that it’s up to us to decide what Taking Back Sunday sounds like,” bassist Matt Rubano said. “We always want to be redefining what that means, and there’s stuff on this record I think in the past we would have stayed away from.”

Rubano said the “sassy” “Cut Me Up Jenny” has a hint of Phoenix and Bloc Party, while “Lonely, Lonely” was inspired by Queens of the Stone Age and became “a freight train of rock & roll.”

Inside its practice space in hip Williamsburg, Brooklyn, Taking Back Sunday’s sound grew tighter. In fact, Lazzara said he cannot even bear to listen to 2002’s Tell All Your Friends anymore.

“I hadn’t hit puberty yet,” he joked. “We’ve just grown as musicians [since then]; it’s so fun to sing these songs now because there’s things I can add to those tunes I couldn’t do then.”

Still, the band has not abandoned older songs that still strike a chord with fans. It has a new version of “Cute Without the E” inspired by the mono-note melodies of Interpol and Joy Division (”We put on thousand-dollar suits and look really handsome and intense,” Lazzara deadpanned) and it recently paid a visit to rock vocal coach Melissa Cross. Cross, who normally assists harder bands like Underoath, Thursday and Andrew W.K., spent four hours with the band helping it to work on its singing techniques.

Before heading out to open for Blink-182 and Weezer over the summer, Taking Back Sunday is debuting the new record on a U.S. club tour.

“We’re excited to have the new songs reach people’s ears, but also nervous,” Lazzara said, noting the band is rehearsing more than ever. Adds Rubano, “If you’re not anxious for people to hear your new record, then you’ve done something wrong.”