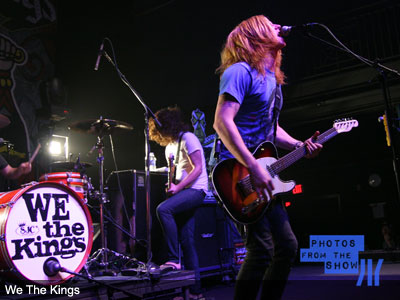 The air was cold and dry as the moon crept overhead.  Quick gusts of wind in the bitter Midwest winter whipped at the hands and faces of those lining Pike Street in the historic district of Pontiac, Mich. The surrounding streets seemed dead and empty, but for the 1,500 in attendance for the sold-out stop of the Take Action Tour at popular Pontiac venue The Crofoot, the same could not be said.

Taking the stage shortly after doors opened to kick off the night was electro-pop Call the Cops.  Using its’ half-hour set to win over fans as they entered the venue, the band tried to maintain high energy in playing songs from their Motion Sickness EP.  While those who had arrived early to the venue may have enjoyed them, many were still filling the concert hall as the band left the stage.

Next up was the Orlando-based four piece, There for Tomorrow.  Playing full band after missing a few dates due to transportation issues, the crowd erupted into applause and near deafening screams as soon as the act took the stage.  Entertaining the crowd with songs primarily from their Hopeless Records debut LP, A Little Faster, the band played songs such as “Stories” as well as the album’s title track.  With high energy, full-crowd sing-alongs and nearly the entire crowd jumping in unison to the music, There For Tomorrow successfully captured the attention of the crowd in a buzz that lasted the duration of the evening.

“Tonight’s show was great,” vocalist Maika Maille said in an interview with idobi.  “This tour is probably the biggest tour that we’ve ever been on, so it’s surprising how smooth and how awesome this tour has been going.”

After another round of ear-piercing screams from those in attendance, vocalist Nick Santino and the rest of A Rocket to the Moon welcomed the crowd before launching into “Dakota” from their 2009 album On Your Side.  It was clear that the audience was enjoying the band, as they played a mix of songs including “Give a Damn”, “Like We Used To” and “Baby Blue Eyes”.

“I don’t think I’ll be able to say it enough tonight, you guys are fabulous.  Keep it up,” Santino told the audience before the band closed the set with “Mr.Right”.

The members of Mayday Parade must have fed off of this sentiment, as the quintet did their best to keep the excitement level at its’ peak.  Encouraging crowd participation in the form of singing in place of vocalist Derek Sanders and jumping around, the band made full use of the stage as they swung guitars, leaned into the audience and ran from side to side with an energy level rivaling that of those in attendance.  In a song split equally of both new and old, the band cycled through new tracks such as “Kids in Love” as well as fan favorites “Black Cat” and “When I Get Home You’re So Dead”.  By the time the band closed with “Jamie All Over”, many in attendance were anxiously waiting the arrival of headling act We The Kings.  They did not have to wait long.

After steadfastly launching into a nearly hour and a half long set,  complete with an advanced lightshow, the band took time to remind the screaming kids that a bigger issue than music was at hand.

“There’s a bigger reason you guys are all here,” vocalist Travis Clark said. “Not only do you get to see five kick-ass bands, but you get to help save somebody’s life.”

Clark was friendly and appreciative to the audience, engaging the crowd between songs as well as during the bands’ performance.  Playing expected favorites such as “Secret Valentine”, the group surprised fans with a cover of The Killers’ track, “Mr. Brightside”.  After the set’s close, thousands in attendance were screaming for more.  The band obliged, closing out the night with “Heaven Can Wait” and “Check Yes Juliet”, much to the appreciation of everybody in attendance.

Tags: A Rocket To The Moon, Call the Cops, Mayday Parade, Take Action Tour, There For Tomorrow, We The Kings