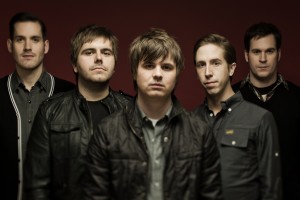 Silverstein are in the studio working on a collection of songs each clocking in at under 90 seconds. The album will feature 22 tracks in total, an even split of new material and covers of bands like NOFX, Green Day, and The Descendents. A studio video and statement from the band about the album can be seen below.

“Most people might associate a ‘short song’, with a fast punk rock vibe, but that’s not always the case,” explains Silverstein drummer Paul Koehler about the follow-up to their critically-acclaimed album Rescue (Hopeless Records, 2011). “There will still be a ballad, a breakdown, and some singalongs, all amidst these quick songs. The idea is to give the listeners a mini-Silverstein album and take them through all of the peaks and valleys they could expect from any of our original albums.” The appropriately titled Short Songs (all songs are under 90 seconds) is currently in its recording phase and is planned for release in January 2012.

Consisting of twenty-two songs, the project will showcase two different “sides” of the Toronto-based hardcore band: Side A will consist of eleven originals and Side B will be covers of punk songs that the band has always held in high esteem. “Just with every album we produce, we’re always thinking of the ‘sides’ of a record,” he says. “In this example, Side A will be the originals, and Side B will be the covers. Each can be listened to as a contained unit, or you can easily play through just as on CD or in your iTunes.” Among the songs the band plans on covering are “It’s My Job to Keep Punk Rock Elite” (NOFX), “The Ballad of Wilhelm Fink” (Green Day), “Coffee Mug” (Descendents), and “236 East Broadway” (Gob). Kicking off Side B with Dead Kennedys’ incredibly short ‘Short Songs’ (which repeats ‘I like short songs’ ten times), Paul explains the track selection: “All of the songs we are covering are before 2000, and before we were ever a band. Because of that, these songs are a lot older and have some rougher recordings due to the technology back then. We had some difficulties learning exactly how these songs were played and adapting them to our own abilities (ex. our Orchid cover ‘Destination: Blood’). Part of this made it a better challenge and definitely opened us up to a lot more playing styles.”

Silverstein will be entering the studio this week with producer Jordan Valeriote who produced both Rescue and the Transitions EP. “Instead of waiting for our next proper album, we decided to start writing new material for this and it came together quicker than any album before,” Paul says. “Short Songs is an extension of Rescue and a further channeling of our influences in our own material. We’re writing the music that we like and get to showcase it in this creative way.”

“This is definitely a passion project,” concludes Paul, “and it’s definitely one that has been an incredible amount of fun to put together.” Rounding out 2011 with a handful of Canadian and South American shows, Silverstein will be extensively touring North America and Europe in 2012.