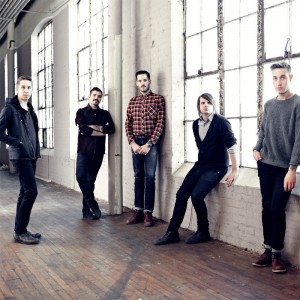 Silverstein will release  their  seventh studio album This Is How The Wind Shifts on  February  5th, 2013 via Hopeless Records. The album is a concept record and the first track “Stand Amid The Roar” can be streamed below. A number of pre-order packages can be found here.

The band has also announced an extensive tour in support of the album throughout North America and Europe. Support for the North American dates will come from Glass Cloud, while the Europe dates will have Funeral For A Friend and The Tidal Sleep. Special VIP packages for the tour can be purchased here  and the full tour dates can be seen by scrolling down.

The idea of this album is how a persons life can change forever with just one event.   It is the “what if” that everyone thinks about from time to time.   This album is different from a typical start to finish story concept album, or an album where all the songs have a common theme.   Each track has a parallel track that tells the story in a different light, what would have happened if things were different due to a single event.   The song titles of each parallel track go together, forming a sentence or in some cases two words that relate to each other and to the story.   Overall, the point of this album is not to prove the existence of fate, or to disprove it. It’s a discussion of life, of loss, of trial and error, of success within failure, of failure within success, of the struggle between your actions and your feelings, and how those don’t always go together. This Is How The Wind Shifts is a journey that jumps around but stays cohesive, with underlying meaning and stories that have a real human meaning and cater to the soul.