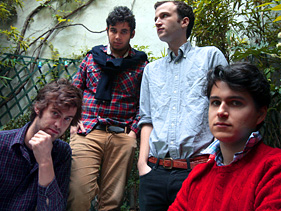 The ninth annual Sasquatch festival, held every year at the picturesque Gorge Amphitheatre in George, Wa., revealed its full lineup during a party at Seattle’s Crocodile CafÃ©.

Even though the terrible winter weather still grips most of the East Coast and the South, there’s a light at the end of the tunnel: Festival season is just around the corner. The Coachella lineup has already been announced (featuring Jay-Z, Muse and Gorillaz), the bands for Bonnaroo have been set (including Weezer, the Flaming Lips, Kings of Leon and Jay-Z again) and rumors are already circulating about the Lollapalooza lineup (Lady Gaga and the reunited Soundgarden are being whispered about).

On Monday night, the latest warm-weather festival announced its full slate of bands. The ninth annual Sasquatch festival, held every year at the picturesque Gorge Amphitheatre in George, Wa., revealed its full lineup during a party at Seattle’s Crocodile CafÃ©. The indie-centric lineup is lead by the newly reunited Pavement, My Morning Jacket, MGMT and Vampire Weekend.

The three-day festival, which kicks off on Saturday, May 29, and runs through Monday, May 31 (Memorial Day), will also feature sets from a bevy of indie favorites like the National, the Hold Steady, Passion Pit, the Dirty Projectors, No Age, Tegan & Sara, Drive By Truckers, She & Him, Band of Horses and LCD Soundsystem.

It won’t be all jangly guitars, though, as Brother Ali, Wale and Kid Cudi will hold down the hip-hop fort. Sasquatch also embraces stand-up comedy, which is why former “Daily Show” correspondent Rob Riggle and Craig Robinson (star of “The Office” and the upcoming “Hot Tub Time Machine”) are booked for sets.

More bands will be announced as the opening day of the festival approaches, but in the meantime, presale begins on Wednesday, and the rest of the tickets will be up for grabs on Saturday.