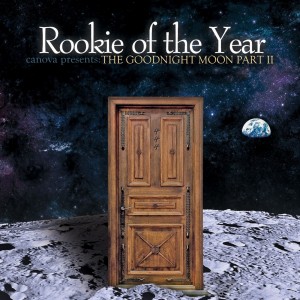 Rookie of the Year could have easily peaked with their swan song The Goodnight Moon in 2006 before fading into obscurity like many successful pop rock bands from the 00’s have. After numerous lineup changes over the years, culminating in the departure of every band member except vocalist Ryan Dunson in 2010, it was possible Rookie of the Year was over. Instead, Dunson – who originally started Rookie as an acoustic solo project – decided to carry on by himself. After exploring an ambient pop sound on his last LP, The Most Beautiful, Dunson decided to return to the album that started it all for influence, aptly naming the new release The Goodnight Moon Part II. Released independently, this record is the latest proof of Dunson’s persistence and resilience in the wake of a volatile, unforgiving industry.

The likely thesis of the album is presented in “Raleigh” when Dunson sings “Stuck between 28 and 17 / And I don’t know how I can feel this way.” Rookie of the Year started when Dunson was just a teenager, and now years later, he explores the growing pains both sonically and lyrically, building off the same themes of heartache and longing from The Goodnight Moon. The end product is powerfully nostalgic and retrospective. “Raleigh” represents the oldest side of the spectrum with its gentle delivery of extremely dark lyrics such as “Sometimes I want to overdose / But I just can’t cause I’ve got things to prove” and “You want a man / Someone without clumsy hands / Who will stab you with a knife you can’t remove.” On the other side of the spectrum you get “Wild and Free (The Way It Goes),” the album’s gratuitous party song. It’s undeniably catchy, but its Jonas Brothers vibe and cheap lyrics keep you cringing throughout the entire song. It feels quite out of place on such an emotional record.

There’s no denying Dunson can write a good pop melody, and he demonstrates that throughout the entire album. Lead single “Love/Me/Crazy” is a catchy pop rock song mostly due to the seamless layers of electric and acoustic guitars with a touch of bells and piano. Although the majority of the album consists of love songs, this song also reflects on Dunson’s life in general as he talks about the “places I’ve seen” and the “lessons I could’ve learned.” “Colors of Summer” is one of the best songs on the album, mainly due to Dunson’s gleaming vocal performance throughout the verses. During the rock-driven choruses, 28 looks back on 17, sadly reminiscing on how time can change people and their relationships even if they don’t want them to. It’s a poignant story of regret, yet acceptance.

“Love and War” is another track that successfully pulls off the mid-tempo power ballad. The lyrical fodder is also quite similar, once again detailing the hardships of love. “Leave It All Behind” essentially sounds like Mumford & Sons meets pop rock, while containing some lyrical ties to “Pop Destroyed the Scene” (7 years later, Dunson still hasn’t gotten the hair out of his eyes).

The album ends with the cryptically titled “444,” which contains a weird fusion of psychedelic elements and simple country-tinged guitar. More importantly though, the vocals at the forefront of the mix serve as the final reminder that Rookie of the Year is Ryan Dunson alone. While the subject matter of the entire record plus its prequel is pretty similar, Dunson manages to deliver each song in a unique, discernible manner. Rookie of the Year have released what music fans are constantly calling for but rarely receive: a return to an artist’s early work. While The Goodnight Moon Part II doesn’t necessarily break any new ground, it’s guaranteed to please fans and anyone else yearning for the pop rock sound of yesteryear.

Tags: Rookie of the Year