Hello everyone! Patrick Walford,  Host of Rock The Walls here. It’s been a while! I am getting too excited for next Saturday’s show so I decided on Saturday Night (when i’d usually do the show) that i’d write a article on some of the music that has changed my life since really getting into music about 5 years ago. It isn’t the typical list of “Blink 182” or “Green Day” like most kids born in 1990 because of how late I got into the music scene (17). The list is diverse and features everything from Metal to Rock Bands. There are about 10 more bands I could’ve added but I decided on 9.  These bands are in no particular order and aren’t ranked by favourites. Just 9 great bands I’d love for you to check out.  Enjoy!

Rock The Walls returns next Saturday at 8pmET featuring Suicide Silence, Obey The Brave, Stick To Your Guns, and Madball. 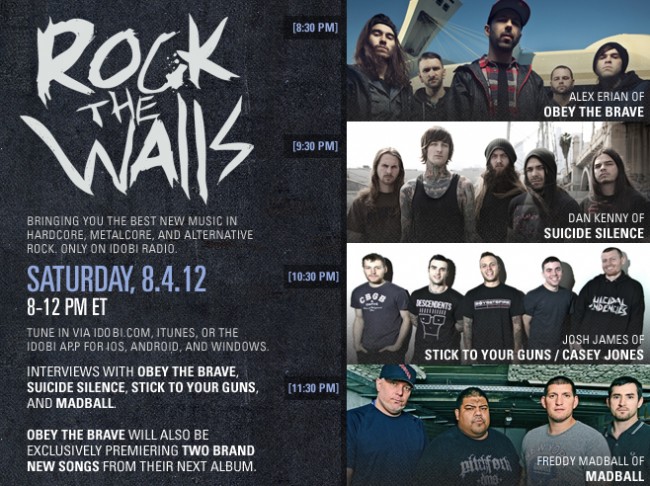 I’m not a straight edge kid, because right now I currently really have been enjoying Mountain Dew more than drinking a Beer. Personal choice but it’s cool if you love beer! This music video just about sums up my life right now. I fell in love with music at 17 years old, and just rekindled my love through PMA with it the same way when the kid goes to a show. I’ve met so many rad friends just going to shows by myself promoting RTW after the show or Online during my show. It is one of the coolest feelings ever when a kid comes up to you and says “Are you Rock The Walls?! Your show is awesome man!” like i’m a band or something. It makes me feel amazing and makes me want to work that much harder at it. It’s what the kidz call Positive Mental Attitude (PMA) something coined (at least in this scene of music) by H2O Vocalist Toby Morse. One Life One Chance! Do what YOU want to do whether people hate you for it or not. No one else matters but YOU. I’ll never have to worry about “being alone at a show” because of all the awesome kids i’ve met across Metal, Pop Punk, Hardcore, and any other shows.

I went to College and then found out after a lot of stress of wondering what to do a year and a half out of school with no job that music was the only thing I wanted to do. That involved working in Radio, but my own version of a dream radio/music job was Rock The Walls. I handpick what bands I interview, pick the music I play, meet tons of amazing people who have changed my life (you the listeners/readers) and get to cover some amazing shows. If not for Music and Rock The Walls, I can say I never would’ve met (in-person or Online as a listener) most of you. Thanks for making me feel good and helping me realize this is all I needed in my life to be happy whenever I feel stressed.

As shown above, I’ll be speaking with Josh James now of Stick To Your Guns about his time in Casey Jones and now being apart of STYG next Saturday at 10:30pmET. I’m stoked to do the interview big time.

2.The Ghost Inside – This Is What I Know About Sacrifice

I’m posting both the explaination of this song and the actual song below. Watch the vids. They explain it. All their songs are passion filled and that’s why TGI changed my life. 3 words. Follow Your Dreams. The Ghost Inside will be joining me on the show in a couple weeks time!

3. Stray From The Path- Deathbeds (feat. Jonathan Vigil of The Ghost Inside)

I’m gonna do what I love, just like Stray From The Path are doing. No doubt one of the hardest working bands in the scene and some of my good friends. I met them on their first ever Canadian Run of shows and they stayed at both my College and Hometown House. They are the raddest dudes. We talked music and played NHL 10 the entire 2 nights we got to hang basically haha.

This song is about living “The American Nightmare”. Working a job you hate because you HAVE to do it. You don’t have to do anything you don’t want to. I don’t know about you guys, but I live in fucking North America man. I can pretty much do whatever the hell makes us happy. Can’t wait to see them out The Eastern Canada Tour this fall (Sponsored by Rock The Walls)!

Ah. The first serious break-up. Always hits you the hardest doesnt it?! This band helped me get through it so much. After you get over the hump or dilema if you will, you feel like you can do ANYTHING. Kinda like Justin doing the crazy science equation of EVERYTHING in this video!

Or the awesome dance at the end. MCS just YOLO’ing. They just wrapped up their first tour in a van (moving from a bus) in years and said “it was one of the best tours we’ve ever done”. It doesn’t matter if you have a van or a bus, it’s about being out on the road and doing what you love with your friends.

I’ll be playing my interview with Matt Taylor in a few weeks time!

Self-Explainatory if you listen! Also the video shows the friends from the road really are like family when you go out on tour. When you are down, they bring you back up. I have toured with only one band on Rock The Walls Wintour and literally within in 2 days we were all best buds. I’ll be repping them in my new promo shots.

6. Stick To Your Guns – Diamond / Bringing You Down

I love this band and I love these songs. Bringing You Down is inspired by the “Occupy” movement. People being pissed off from The Billion Dollar Corporations and revolting. Diamond as a whole is one of my favourite albums of 2012 thus far and has been huge for me this year. Here is the album titled track and Bringing You Down

This band is amazing live. I’ve never gotten the chills from a band until seeing these guys just from a intro when I saw them at Warped Tour 2010 in Toronto. Watching their documentary and interviewing them several times makes me have a even greater appreciation for this band and how much i love them. They literally came over to the US and just toured their asses off because it’s what they wanted to do. Hard work pays off eh (how Canadian of me..)?

8. Set Your Goals – This Will Be The Death Of Us

Self-explanatory if you listen. This is a band i’ve had the chance to interview a ton. Last time hit home the hardest though. After wrapping up with Vocalist Jordan Brown which was a 40 minute conversation on the Pop Punks Not Dead Tour.  I asked him if they were going to play this song. He said they weren’t and then I told him why it meant so much to me. Because what I was doing my interview for (Rock The Walls) is what made me love that song.

They got on stage 30minutes later and near the end of their set personally dedicated a song to me and sent me a shoutout before Certain, which also happened to be my favourite song on Burning At Both Ends. Completely unexpected and awesome.

After seeing the documentary Back & Forth on these guys as well as seeing them perform a killer 2 hour set, I was blown away this past May at Bamboozle. Far and away the best live performance i’ve ever seen and Dave Grohl is an awesome dude. You can tell from when he talks on stage it’s all genuine and it’s all from the heart. Foo Fighters are genuinely thankful for where they are. It’s because they are incredible musicians. Definitely on the wishlist of bands i’d love to interview.

I also love this music video. It’s hilarious and a lot of what life is like sometimes. You are so pissed you just want to explode at everyone. You know it’s not a good idea though. I just like seeing him say “fuck this shit” at the start and doing what he needs to do to get to band practice.

Hopefully you guys enjoyed this list and checked out a couple of new bands you hadn’t before. If you know them well sweet! Now you know just a little reason why I love each of these bands and how they helped me become who I am today.  You can check out Rock The Walls returning next Saturday at 8pm-Midnight ET featuring interviews with Suicide Silence, Obey The Brave (Exclusive Song Premiere), Stick To Your Guns/Casey Jones, and Madball!