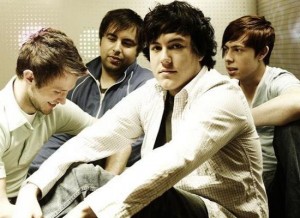 NEW YORK – Sunday evening in New York City was rainy and quiet, but it didn’t stop fans from packing into the Studio at Webster to take in the Reach For The Sun tour.

Kicking things off was the Columbus, Ohio quintet City Lights, which played a blend of pop punk that incorporated screaming and breakdowns, an odd choice to open the pop-rock based tour. Although the band members provided plenty of energy while jumping around the stage, the audience failed to be impressed. Relying mostly on songs off its Rock Like A Party Star EP, City Lights did show potential, but appeared lost in countless layers of mismatched screaming that obscured otherwise clean vocals.

Screams could be heard from teen girls eager to see The Bigger Lights as soon as the pop-rock act took the stage. Out to promote its newly released self-titled album, the band played catchy tracks such as “Hey Summer” and “Jessie.” Singer Topher Talley captivated the crowd with a Steven Tyler-esque presence, while Chris McPeters provided some guitar solos that were  straight out of the 80s. It was not all new material, though, as oldie “Closer (Times Stop Breathing)” received the strongest reaction during the positive, upbeat set.

The venue finally seemed to be full once The Morning Of took the stage. The band truly stood out with its dual male-female vocals and piano-tinged songs. Having released The Way I Fell In earlier in the year, the act has grown musically and has gained a larger fan base. Highlights of the set included “Tell Me I’m Wrong,” “Cobwebs and Cables” and “Shine,” which members dedicated to a friend. Closing out the performance was a strong rendition of “The Ones That Fall Apart,” that left the audience more than satisfied and ready for the headliner to take the stage.

Those in attendance were more than anxious for The Dangerous Summer to play and knew they were in for a treat as the band would be playing its entire album. Starting things up with “Where I Want To Be,” the band members breezed through every track off of their debut album and tour namesake  Reach For The Sun. Vocalist AJ Perdomo supplied banter throughout the set while drummer Tyler Minsberg provided the backbone to the songs. The band was undoubtedly excited to be there and its members not as nervous as they have been in the past. The audience gave back just as much enthusiasm, if not more, by singing along and jumping around to every song. Whether it was the upbeat tempos of “Surfaced” or the heartfelt lyrics in “Northern Lights”, The Dangerous Summer continued to captivate the crowd every step of the way.

After finishing the songs on the album, the band played a three-song encore. “Good Things,” a new track, showed promise while fan favorite “Disconnect” provided a trip down memory lane. The band closed out with “Of Confidence,” amid chants of “Are these just the nights that we stayed for? / Are these all the lines that could keep us here?” in a finale that provided the perfect close to a memorable night.