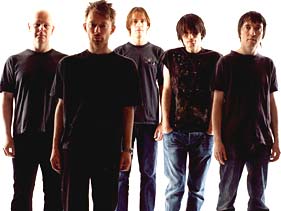 Even though Radiohead frontman Thom Yorke recently declared that the entire record industry would collapse within a matter of months, that hasn’t stopped his band from taking care of its own business. Guitarist Ed O’Brien told BBC 6 Music show host Adam Buxton that the follow-up to 2007’s In Rainbows is nearly complete.

O’Brien says that while he believes the album could be in fans’ hands by the end of the year, there are always variables.

“Ideally, it would be great if it came out sometime this year. It has got to. I hope so,” he said. “But of course, it being a creative process, at the last bit also, you have bursts of energy, you achieve a lot of things in a small period of time and then you’re nearly there. It might slow down. But yeah, hopefully it will be a matter of weeks.”

Details on the new Radiohead album are sketchy. There is no title, no suggestion of what the release might sound like and not even any confirmation that the group is working with longtime producer Nigel Godrich. But O’Brien did suggest that the new album would be a dramatic departure from the band’s previous album.

“It’s genuinely exciting. It’s very different from what we did last time,” he said. “It’s really nice to be doing this. It’s so good to be making music with the band that you feel is still as good as it’s ever been.”