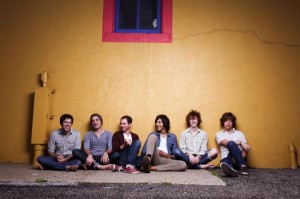 On Thursday at the School of Rock in South Hackensack, New Jersey Jamie McGrath sat down with Ben Leibsch of You, Me and Everyone We Know after their set on the second to last day on the “Would It Kill You?” tour with Hellgoodbye, Gold Motel and Now, Now Every Children.  They discussed touring, recording, festivals, socks, early 2000s alternative rock bands and exposing fans to new types of music.

idobi: Last time you were here at the School of Rock, you were on the “Christmas Brings Me Down” tour with Sparks the Rescue.   How does that tour compare to the one you are on now?

Ben Liebsch: Obviously Hellogoodbye is a much bigger band than anyone that we are on that tour with.   The crowd’s a little different; this is a much more indie tour, which we are all about.   This is actually our second to last day on this run; it’s been a lot of fun.   We’ve gotten into some trouble and enjoyed ourselves thoroughly which is what a tour should be.   Ideally you’ll be able to hang out with anybody anytime you seem them.

idobi: Do you guys hope that you can make some friends and down the line tour again with those bands?

idobi: So I guess you’ve been making friends and having a good time on tour so far?

Liebsch:  We are dropping off the tour two weeks before it ends.   We have to go home and record and come out to the east coast and shoot some stuff and then the Glamour Kills tour starts in New York on March 3rd.   But my brain totally flaked on what the actual question was.

idobi: No problem, we will keep on moving.   What are you going in to record?

Liebsch:  I can’t tell you yet.   I told someone in another interview and I got yelled at; but we will be recording some songs that will be released in the spring.

idobi: How has the reception been to the songs from your new album?   Are people reacting the way you want them to?

Liebsch: Yeah, absolutely — when we come back to a place, to a market and there are more and more people there. “My buddy has been trying to get me to listen to you for a year now and I love it and I’m glad he did.”   It’s all happening as we hoped it would, slowly but surely.   I have those socks (Wigwam brand), they’re comfortable as hell.   But people seem to be enjoying it and I think we did what we wanted to do with the record and people are reacting positively.

idobi: The amount of time that you usually play, around thirty minutes, the right amount of time for people to figure out what you are all about on stage?

Liebsch:  Anything else for a support slot would be a little indulgent, unless you’re main support on a four band package.   We are used to playing for thirty minutes so any time we play for longer is interesting. “What do you wanna play?” “I don’t know, what do you guys wanna hear? Fuck it.”

idobi: On the Glamour Kills tour coming up, you are one of the opening bands.   Are you playing a little bit shorter?

Liebsch:  We will be able to fit the same amount of songs in less time, we fuck around a little bit between songs so a little less banter between songs.   We really want to drive home who we are, we have the chance each night to set the pace for the rest of the show and we need to set a high bar.

idobi: On that upcoming tour it seems that you guys stick out a bit because the other bands have a poppy radio kind of sound with The Downtown Fiction and The Ready Set.   I know how bands usually get on tours, how did you guys fit on that tour?

Liebsch:  Jordan from The Ready Set, I guess, has been a fan and he likes the band and it came up that they were gonna be doing this tour.   We tried to do a tour together at some point last year and it didn’t pan out but this time around it worked.   That’s funny, this is the second time under the same circumstances, we tried touring before and it didn’t happen even though it was days away from being solidified but it didn’t happen.   That happened with us and Forgive Durden, they offered us a west coast tour three years ago and we couldn’t do it.   Then six months later we did a national tour with them.   So as far as I know, Jordan heard the band and he liked it and he came out to see us in New York the day our record came out and after that we were offered the tour.   For the kids that will be coming to the shows, we aim to be sort of band that is a little different.   There are a lot of young kids who haven’t really explored music on their own yet and like me: I was fourteen and I hadn’t gotten adept at discovering music on my own.   I stumbled upon Saves The Day’s Through Being Cool and it kind of changed my perspective on what I wanted to listen to.   I’m aiming to be that for a lot of people on the tour and a lot of the kids coming to the shows.   Not as epic or mind-blowing as Saves The Day was, but in the same vein to give them something to get excited about.

idobi: It seems you guys are pretty happy with Doghouse. Have you seen a difference in record sales and moving albums with a label behind it versus doing it independently with your first two EPs?

Liebsch:  Well we gave away our first two so the strategy is totally different, we didn’t really push the EPs.   We sold them, but we never marketed it to sell.   If people wanted to buy it and support that was great.   We gave away about 75,000 copies of our first two EPs and sold about 11,000 copies of each.   The approach is definitely different; we want people to know about the record and the fact that we spent so much time giving away music building up a fan base to initially support and spread the word.   As far as the label goes — Doghouse does what a label does, they get the feet of the record in doors of places that we can’t get to on our own.   That is one of the reasons we signed with Doghouse, other than the fact that they are a great label.

idobi: I’ve noticed on twitter and some message boards that there is a small push by individuals and fans to get you guys on Warped Tour.   Is there any possibility of that happening?

Liebsch:  I was unaware of it until a couple days ago but apparently people have been flooding them with messages.   It’s not something that we started, but we have been pretty vocal that we would love to spend a summer doing it.   Whether or not it happens, we’ll be touring regardless.   It would be a cool opportunity and I’m flattered that our fans are so outspoken for us, which is important because we’re a blue collar band.   Everything we get we have clawed for.

idobi: It seems that things are falling in your favor this year.   Can you confirm or deny everything that has been said over the past few days about playing a festival in New Jersey at the end of April, beginning of May.   Can you say anything about that yet?

Liebsch:  I can’t.   I know in May we are going to be playing Skate Against Drugs (Saturday, May 7th) in Maine with Hit The Lights and A Loss For Words and a bunch of other bands.   But yeah, we will be in the Jersey area at some point around that same time…yeah, hanging out or whatever.

idobi: After the recording and the Glamour Kills tour, do you guys have any touring plans for the rest of 2011?

Liebsch:  Two weeks after we end the Glamour Kills tour, we might be doing some headlining in the Midwest and northeast.   After that, we are working on some things but nothing is super solid yet, should be coming to fruition in the next week or so.

idobi: Is that how touring works? You know what you are doing a few weeks or months ahead of schedule?

Liebsch:  The bigger you get, I guess, the more ahead of times you know.   Right now we only know two or three months in advance.   There were times as a band, even last year we knew about a tour four or five weeks ahead of time.   So when they announced the dates it was about a month ahead of time.  Or we would find out we’re playing the South two weeks prior so we’d have to haul ass to Texas.   But I guess the bigger you get the farther your able to see and the more shoulders your standing on.   But I like not knowing what’s going on around the bend just yet.   When you know everything a year in advance that’s nice because you can plan an actual life but I like the chaos.

idobi: Do you guys still call the Washington, D.C. / Baltimore area home base?

Liebsch:  We’ve never really had a home; we hit the road 6 months into being a band and did 5 or 6 shows in the Baltimore area. We’ve always been a bit of a gypsy band with no actual home.   We do better in Chicago than anywhere else at this point and that’s just pure luck, I guess we struck a chord there and that’s spreading across the country now.   I wouldn’t say we have a home, I would say we have places we live individually but we don’t have anywhere we could call a hometown show.

idobi: I only ask that because you guys are ending this tour in Pittsburgh and I was wondering why Pittsburgh?

Liebsch:  Because we have 10 days to record four songs; we are driving to Chicago so we are already heading that way so we might as well do it.   In addition, we are playing the Chicago date of this Hellogoodbye tour so it makes sense to be out there.

idobi: Can you guys play a larger venue out there, even though all venues on the tour are about the same size?

Liebsch:  Depending on where we play in Chicago, we are good for 200-300 people when we are headlining.   The Bottom Lounge is probably a little bit smaller than the School of Rock because this is a giant warehouse that can fit a Trapt or Puddle of Mudd crowd.   But it’s a cool venue and I’m excited.

Liebsch: Thanks for chatting.

Tags: Hellogoodbye, Puddle of Mudd, Saves The Day, The Ready Set, Trapt, You Me and Everyone We Know