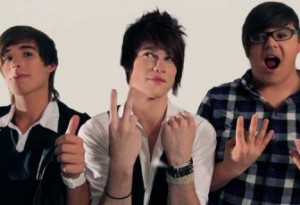 Last week, our very own Jamie McGrath sat down with the guys in A Lifelike Story.  This is a small pop rock band from Flemington, New Jersey who currently have one EP out and are working on releasing a full length album and huge touring plans.

idobi Radio: Can you please state your name and what you play in the band?

Brian: I’m Brian and I am the lead singer and guitarist

Garrett: I’m Garrett and I play bass and do backing vocals

idobi: Hey guys how is it going?

idobi: Starting off, how would you guys describe your band musically?

ALLS:   If we had to pick a genre, it’s more pop.   We can’t pick a particular genre, we just kind of write what we feel and play what we like.   We don’t try to write to any specific style, we generally call it pop rock but we don’t always go into saying we’re going to write a pop rock song.

idobi: You recently released a video for State//Lines, how was that experience?

ALLS: It was shot back in October, and released in late December, early January.   It was a lot of fun; we’ve never done anything that serious before, we spent a lot of time on it to make sure everything went well. It was an interesting experience.

You hear of bands shooting a video over the course of a few days.   We pretty much rented out a place and worked with the director to get the whole thing shot in one day, instead of splitting it over the course of a couple days.   It was lot of work but a lot of fun at the same time.

idobi: Your EP, Never Have I Ever, was released in November.   How has the reaction been so far?

ALLS: It’s been pretty good so far.   The EP has been warmly received.   Obviously its our debut EP and we weren’t exactly sure how people are going to take.   Everyone pretty much fell in love with.   We are blown away by the reaction its been getting and the positive energy that we’ve been receiving.   Everyone comes up to us after shows saying they have our EP on repeat and they love certain songs so we are pretty happy about that and they singing along so that’s good.

idobi: How long were you guys together and writing music before you released the EP?

ALLS: We were together for about 6 months and we over the course of those 6 months we were writing the EP and about the one year mark is when we actually released it.   Over the course of that year we were trying to write as much as we possibly could and get as many options for the EP and once we had the right songs we went into the studio and recorded it.   We had a lot of songs written for the catalog and had to kind of narrow it down to what we thought were the best songs to put on it and it seemed to work out for us.

idobi: So the EP is four or five songs, do you guys have a catalog of probably ten songs to play at shows?

ALLS: We have a couple more that we did not put on the EP.   We’ve been writing so we have more material there.   We have a little collection going.

idobi: Do you guys play the same amount each show or build following where you play a little bit longer now than when you first started out?

ALLS: It really depends on the venue at this point, but when we first started out the sets were definitely a lot shorter and we had a strict amount of time but venues are now giving us more time and we are spending a little bit more time with our fans off stage.   A lot of the connection we have with our fans is offstage.   The minute we get off stage we go talk to our fans and everyone to make sure they are all having a good time.   We don’t go hide in our van.   We try to stay active with our fans at all times.

idobi: Have you found that meeting fans face-to-face and interacting at shows does better for building a following than doing it online?

ALLS: I do like talking to people at shows because we have a good set of people who try to go to every show and bring people each time and are always buying our merch.   We really have a good relationship with a lot of people from surrounding areas.   It definitely helps to meet people at shows.   We do try to keep our online community abuzz of everything, even though it is getting kind of difficult.   You used to be able to go on Myspace and that’s how you found out about bands but Myspace is kind of like the dead amusement park now.   But there’s Facebook and Twitter, and we try to balance both as much as possible and that way we try to get the word out.

idobi: Do you guys have any bands that you love playing with or bands you consider close and play a lot of shows with?

ALLS: We played a bunch of shows with Rookie of the Year and Automatic Loveletter and there are some of the up and coming bands like Action Item from New Jersey, we run into them a lot.   The bands we play with vary, we just want to play and keep in contact with as many people as possible and just keep building up connections.

idobi: What are some of the bands and musical acts that have influenced and inspired A Lifelike Story?

Bryan: As far as writing goes, right now I am heavily influenced by 30 Seconds To Mars, Panic At The Disco and The Killers and I know the drummer of Avenged Sevenfold has influenced Chris.   We all have our own styles and writing wise, growing up Dashboard Confessional and The Spill Canvas were two major influences for me.

Chris: We all try to take a listen to a little bit of everything, so a lot of our stuff and playing style has a pop-rock background and dancier stuff. As far as overall showmanship style, I’m really into industrial bands where the showmanship is key.   Tommy Lee has a style that has a lot of showmanship and you don’t really see that too often.

idobi: Do you guys have any Jersey shows lined up? Do you have kind of a hometown venue where you play a lot of shows?

ALLS: It’s funny that you mention that.   It’s actually kind of difficult for us to get shows in Jersey.   Unfortunately, in our opinion, the New Jersey venues are getting, decreasing a lot, obviously because you got Starland and The Stone Pony but as far as mid level and smaller clubs, unfortunately they are kind of disappearing.   The Jersey scene is very hardcore influenced and there was a big pop punk influence a few years ago and it seems like it has transitioned over to hardcore and screamo.   So being a pop band in that kind of scene, its kind of hard to get shows so we have kind of turned New York City into our hometown.   So to answer your question, we don’t have anything in New Jersey planned right now but we are always booking and getting shows, so who’s to say we wont pick up a show tomorrow, so keep checking online and see what we have going on.

idobi: What does the rest of 2011 have in store for A Lifelike Story?

ALLS: We have a few things in the works that we can’t actually announce yet.   Like we said, we are constantly writing all the time, we are heading into our home studio and are gonna start demoing some songs and hopefully we will have some kind of release in the near future, either an acoustic EP or a full length album, we haven’t really decided that yet.   But right now we are really pushing Never Have I Ever and trying to build up our fan base.   So hopefully we will have a release and a pretty decent tour later in the year.