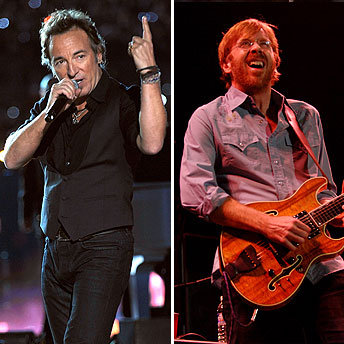 As Rolling Stone first predicted in December 2008, Phish will headline two nights at this year’s Bonnaroo Music Festival, with Bruce Springsteen and the E Street Band also topping the bill. While the two marquee acts don’t really come as a surprise following months of rumors and speculation, the talent underneath the headliners is sure to drop some jaws: The Beastie Boys, Nine Inch Nails, Wilco, Snoop Dogg, David Byrne, Al Green, TV on the Radio and many more will be on hand at the Manchester, Tennessee festival on June 11-14th. Tickets go on sale February 7th, and are being offered in a recession-happy plan that includes five $50 payments.

Need more incentive to attend? How about Animal Collective, the Yeah Yeah Yeahs, Elvis Costello, MGMT, Girl Talk, the Mars Volta, Jenny Lewis, Santogold, Merle Haggard and more as 120 bands and over 20 comedians will perform at the 2009 festival. For Phish fans, this festival provides an opportunity to get some tickets after the Live Nation ticket troubles from last weekend. The addition of Phish also represents the ‘Roo reconnecting with its more jam-band-oriented past after a few years that saw bands like Tool and Metallica serve as headliners. Other jam-friendly acts on the bill include moe., Gov’t Mule and the Del McCoury Band. Bonnaroo organizers promise to add more acts in the coming weeks.

Of course, Rock Daily will be all over Bonnaroo this summer, giving you reports from the frontlines and front rows. While we pack up the Winnebago, check out the full list of announced artists below: