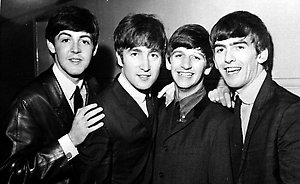 Paul McCartney has told NME.COM that he wants The Beatles songs to be available as downloads.

The Fab Four’s work has long been absent from official download services, but the bassist and songwriter said he and the band are keen for them to be available online — and blamed record label EMI for the delay.

“We were having problems with iTunes — well not iTunes, EMI was the problem — with downloading, which we’d like to do because that’s how a lot of people get their music,” explained McCartney.

However, the legend suggested the band have managed to get round the problem by getting involved in the new ‘The Beatles: Rock Band’ game, which is released tomorrow (September 9).

“We’ve kind of bypassed that [download problems] because now you can do it in ‘Rock Band’,” he said. “I always liked that, when you’re told you can’t do something and suddenly there’s a little route round the back.”

The Beatle added that his top score on the game is currently “zero” as he’s yet to play it.

McCartney was speaking to NME as part of this week’s special issue devoted to The Beatles.

Featuring 13 different covers – one for each LP release —the issue will be available on UK newsstands from tomorrow (September 9).

Each album’s cover will be available to collect from the usual outlets except that of ‘Magical Mystery Tour’ — which was originally released as a double EP in the UK. That cover is only available from the NME Store.

You can also order any individual album covers too at NME.COM/store now.