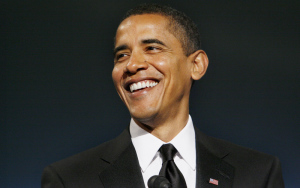 Two years after beginning his improbable quest as a little-known, first-term Illinois senator moves into the Oval Office as the nation’s fourth youngest president.

A King once stood on the steps of the Lincoln Memorial with dreams of equality and respect.

Today, a president will stand on the steps of the U.S. Capitol, living out that dream in front of an entire nation and creating a new chapter in American history.

It’s a chapter many didn’t think they’d live to see. But the day is upon us, and millions of spectators will watch this historic event unfold between those two pillars of American society.

Stepping into history, Obama grasps the reins of power as America’s first black president in a high-noon inauguration amid grave economic worries and high expectations.

Braving icy temperatures and possible snow flurries, hundreds of thousands of people descended on the heavily guarded capital city Tuesday for the first change of administrations since the terror attacks of Sept. 11, 2001.

Two years after beginning his improbable quest as a little-known, first-term Illinois senator with a foreign-sounding name, Obama moves into the Oval Office as the nation’s fourth youngest president, at 47, and the first African-American, a racial barrier-breaking achievement believed impossible by generations of minorities.

Around the world, Obama’s election electrified millions with the hope that America will be more embracing, more open to change.

The dawn of the new Democratic era – with Obama allies in charge of both houses of Congress – ends eight years of Republican control of the White House by George W. Bush. He leaves Washington as one of the nation’s most unpopular and divisive presidents, the architect of two unfinished wars and the man in charge at a time of economic calamity that swept away many Americans’ jobs, savings, homes and dreams – leaving behind a sickening feeling of insecurity.

The unfinished business of the Bush administration thrusts an enormous burden onto Obama’s shoulders. Pre-inauguration polls show Americans believe Obama is on track to succeed and are confident he can turn the economy around. He has cautioned that improvements will take time and that things will get worse before they get better.

Culminating four days of celebration, the script for Obama and Vice President-elect Joe Biden at the nation’s 56th inauguration was to begin with a traditional morning worship service at St. John’s Episcopal Church, across Lafayette Park from the White House, and end with dancing and partying at 10 inaugural balls lasting deep into the night.

By custom, Obama and his wife, Michelle, were invited to the White House for coffee with Bush and his wife, Laura, followed by a shared ride in a sleek, heavily armored Cadillac limousine to the U.S. Capitol for the transfer of power, an event flashed around the world in television and radio broadcasts, podcasts and Internet streaming. On Monday, Vice President Dick Cheney pulled a muscle in his back, leaving him in a wheelchair for the inauguration.

Before noon, Obama steps forward on the West Front of the Capitol to lay his left hand on the same Bible that President Abraham Lincoln used at his first inauguration in 1861. The 35-word oath of office, administered by Chief Justice John Roberts, has been uttered by every president since George Washington. Obama was one of 22 Democratic senators to vote against Roberts’ confirmation to the Supreme Court in 2005.

The son of a Kansas-born mother and Kenya-born father, Obama decided to use his full name in the swearing-in ceremony.

The Constitution says the clock – not the pomp, ceremony and oaths – signals the transfer of the office from the old president to the new one.

The 20th Amendment to the Constitution specifies that the terms of office of the president and vice president “shall end at noon on the 20th day of January … and the terms of their successors shall then begin.”

To the dismay of liberals, Obama invited conservative evangelical pastor Rick Warren – an opponent of gay rights – to give the inaugural invocation.

About a dozen members of Obama’s Cabinet and top appointees – including Secretary of State-designate Hillary Rodham Clinton – were ready for Senate confirmation Tuesday, provided no objections were raised.

More than 10,000 people from all 50 states – including bands and military units – were assembled to follow Obama and Biden from the Capitol on the 1.5-mile inaugural parade route on Pennsylvania Avenue, concluding at a bulletproof reviewing stand in front of the White House. Security was unprecedented. Most bridges into Washington and about 3.5 square miles of downtown were closed.

Obama’s inauguration represents a time of renewal and optimism for a nation gripped by fear and anxiety. Stark numbers tell the story of an economic debacle unrivaled since the 1930s:

Obama and congressional Democrats are working on an $825 billion economic recovery bill that would provide an enormous infusion of public spending and tax cuts. Obama also will have at his disposal the remaining $350 billion in the federal financial bailout fund. His goal is to save or create 3 million jobs and put banks back in the job of lending to customers.

In an appeal for bipartisanship, Obama honored defeated Republican presidential rival John McCain at a dinner Monday night. “There are few Americans who understand this need for common purpose and common effort better than John McCain,” Obama said.

Young and untested, Obama is a man of enormous confidence and electrifying oratorical skills. Hopes for Obama are extremely high, suggesting that Americans are willing to give him a long honeymoon to strengthen the economy and lift the financial gloom.

On Wednesday, his first working day in office, Obama is expected to redeem his campaign promise to begin the withdrawal of U.S. forces from Iraq under a 16-month timetable. Aides said he would summon the Joint Chiefs of Staff to the Oval Office and order that the pullout commence.