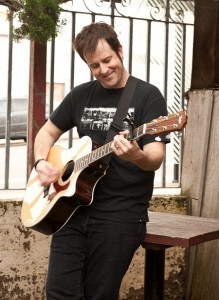 Fat Wreck Chord reports that No Use For A Name singer, Tony Sly, has died.

We received a call earlier today of his passing, and are devastated. We have lost an incredible talent, friend, and father — one of the true greats. Fat Mike had this to say: “One of my dearest friends and favorite song writers has gone way too soon. Tony, you will be greatly missed.”

In a recent interview with Spinner.com, Sly talked about how the medical problems from his hard-partying days resulted in a herniated disc.

Along with No Use For A Name, Sly also worked on an acoustic album with Lagwagon frontman, Joey Cape. Tony Sly leaves behind a wife and two children.

Tags: Fat Mike, Fat Wreck Chord, Lagwagon, No Use For A Name