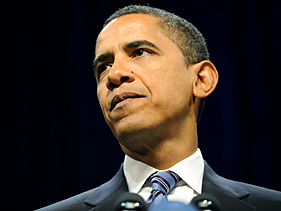 Anchored from President-elect Obama’s official Youth Inaugural Ball, MTV and ServiceNation announced “Be the Change: Live From the Inaugural” on Sunday (January 11), which will celebrate the huge youth-voter turnout in the 2008 presidential election and ongoing youth community service.

The show will feature live remarks from the newly inaugurated president as he addresses young people across the globe from the Youth Inaugural Ball, and call on them to continue to engage in national and community service.

Obama’s remarks will be made available to viewers around the world, reaching a potential global youth audience of 1 billion people in 162 countries and 33 languages. Additionally, the program will air exclusive performances by top recording artists live from the official Youth Inaugural Ball, which will take place at the Hilton Washington in Washington, D.C. The show airs on MTV in the United States on Tuesday, January 20, at 10 p.m. ET/ 7 p.m. PT.

“MTV is thrilled to celebrate not only the extraordinary number of young people who participated in the 2008 presidential elections, but who are engaged in activism efforts globally,” said Stephen Friedman, general manager of MTV. “This generation is distinctly unique – they’re not just witnessing this historic moment – through their commitment to service and passionate spirit, they are the catalysts we need to continue to drive our nation forward.”

“The president-elect has made his commitment to service a priority throughout his life, during his campaign, and it will continue to be a priority in his administration,” said Emmett Beliveau, executive director of the Presidential Inaugural Committee. “There is no better way to follow up the inauguration’s national campaign for service, ‘Renew America Together,’ than having MTV anchor its coverage from our Youth Inaugural Ball. We are truly pleased that MTV has chosen to highlight the importance of service and is helping to bring that message to millions of young people.”

In addition to being made available to MTV channels globally, the special program will premiere live across all MTV platforms in the United States, including MTV, MTV.com, MTV2, MTV Tr3s, mtvU, MTV Hits, MTV Jams and MTV Mobile on January 20 at 10 p.m. ET, and will re-air immediately following.

Hosted by MTV News’ Sway Calloway, with reports from MTV News correspondents Kim Stolz and Tim Kash and MTV Tr3s VJ Carlos Santos, the program will include footage from service activities around the country on Martin Luther King Day, in addition to showing young people imparting change through major service projects taking place in the United States and in Kenya.

Service projects to be featured include:

In Washington D.C.:
MTV and ServiceNation, in collaboration with City Year>, Heart of America and D.C. Cares, will lead a group of 200 young volunteers in a makeover project at Simon Elementary School in Washington, D.C.; 76 percent of the school’s students come from low-income households, and the high school dropout rate for this community is over 50 percent. During “Be The Change: Live From the Inaugural,” young volunteers will complete the school beautification project, including a new library, and unveil their work. Target has partnered with ServiceNation and MTV to support the volunteer activities at Simon Elementary School. During the broadcast, MTV will also share the story of a young community volunteer who has been inspired by the recent election to commit to service and change.

In New Orleans:
Three years after Hurricanes Katrina and Rita rendered uninhabitable 27,000 homes in St. Bernard Parish, less than 50 percent of the population has returned. Out of those homeowners who have returned, more than 1,000 families are still living in FEMA trailers. Youth volunteers with the St. Bernard Project, a community-based nonprofit in St. Bernard Parish that has rebuilt 166 homes to date, will work around the clock to rebuild the home of the Albers family, who lost everything to Hurricane Katrina. For the first time in three years, live during “Be the Change: Live From the Inaugural,” Robin Albers and her teenage daughter will walk into their completed home with the encouragement of nearly 200 supporters.

In Lihanda, Kenya:
Africa has the greatest proportion of people living in extreme poverty: More than 40 percent of its population, or roughly 300 million people, are living on less than $1 a day. With rural communities stuck in a poverty trap, they’re unable to make the investments in human capital and infrastructure required to achieve self-sustaining economic growth. Millennium Promise, an organization co-founded by Dr. Jeffrey Sachs, offers a bold, holistic model for helping rural African communities lift themselves out of extreme poverty by focusing on agriculture, health, education and infrastructure.

For the inauguration special, MTV will work with Millennium Promise in Lihanda, Kenya – roughly 20 kilometers from the western village of Nyangoma-Kogelo, where President-elect Obama’s father grew up and where his grandmother still lives. The region is one of the poorest parts of Kenya, where chronic hunger and diseases like malaria are commonplace. The show will follow a Columbia University student who volunteers with the Millennium Villages Project as he helps build a computer lab at Omindo Primary School, which will give young Kenyans some of the tools they need to expand their education. By using readily available technology and Internet connectivity, the computers will also help an entire community end their isolation by bridging the digital divide. This is done by improving health care records, providing educational materials, creating business, banking and a host of other information services. Once completed, the new lab will provide computers and Internet access to more than 500 students at the school and to the 5,000 other members of the community.

“President Elect Obama has inspired our nation with his bold and visionary plan for national and community service,” said Alan Khazei, CEO of Be the Change, Inc., a lead organizer of ServiceNation. “Everyone involved with ServiceNation is committed to helping the President-elect and bipartisan leaders in Congress pass new legislation to launch this new era of service in which millions of Americans are provided the opportunity to serve their communities and our country. America is always at its best when our citizens answer the call and unite in common cause.”

“Be the Change: Live From the Inaugural” will air live on MTV on Tuesday, January 20, at 10 p.m. ET/ 7 p.m. PT. MTV News will have wall-to-wall coverage of the event and of the scenes in Washington, D.C., New Orleans and Kenya in the days leading up to the event and in the days that follow.