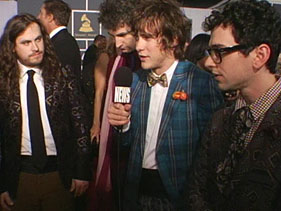 MGMT didn’t end up winning the Best New Artist Grammy at Sunday’s show, but plenty of people were offering them up Congratulations nonetheless … which is a terribly punny way of bringing up their new album.

See, MGMT will return later this year with Congratulations, the follow-up to their surprising 2007 breakout Oracular Spectacular, and an album they are describing as being “weird … like a soul record.” Obviously we were intrigued (we like weird soul albums), so when MTV News caught up with them on the Grammy red carpet, we had to ask them for an update on all things congratulatory.

“Our album hopefully will be coming out in April,” Andrew Van Wyngarden said. “Maybe after you hear it, you’ll be saying, ‘Congratulations.’ That’s the whole wordplay of the thing.”

Totally. And though Van Wyngarden is still sticking by the whole “weird” thing, he also made it sound very much like Congratulations will still retain some of the whimsy that made Oracular resonate with fans.

“We’ve been fortunate that the music we’ve made that’s been kind of honest and whatever’s in our heads, other people really like it and find something good about it,” he said. “And we’re just going to keep doing that. If it works the first time, maybe it will work again.”

It bears mentioning here that when MTV News reached out to MGMT’s label Columbia to confirm the release of the album, we were told that the actual date has yet to be determined. Also, refuting the band’s earlier claims that no singles will be released from Congratulations, the Columbia spokesperson said there will “definitely” be singles.

So while some confusion remains about just when and how fans will hear the album, MGMT definitely plan on touring behind it. And it sounds like it’s going to be a pretty, uh, interesting show.

“We’re going to start touring in mid-March. We’re playing a few festivals,” Van Wyngarden said. “[The show is] kind of like the Grateful Dead meets Cyndi Lauper and Roxy Music.”