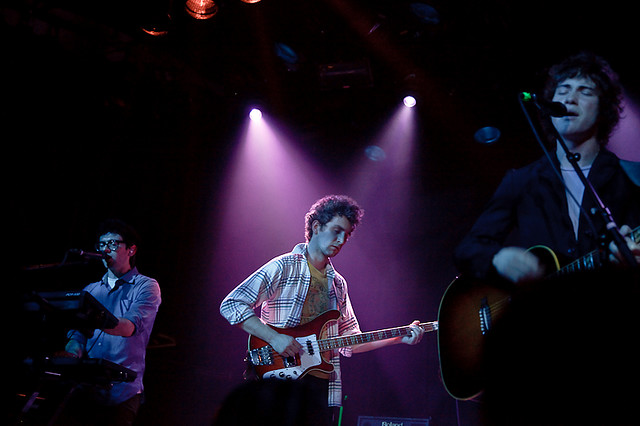 COLUMBIA, Md. – Electrifying screens with acid-trip psychedelic visuals zooming in and out of focus, a band so high on energy it seemingly got lost in its own momentum and a raucous crowd defined Saturday’s MGMT show at Merriweather Post Pavilion.

The band had quite the task before it. Since the release of its second studio album Congratulations in April, MGMT has, to say the least, received some negative press. To some, the album appeared to be a confused medley, an incoherent jumble of ’60s-era psychedelic acid rock and contemporary technopop.  In fact, MGMT’s second release did represent a trip, and not only from decade to decade, but from the band’s first album.  Nowhere on Congratulations did the band members replicate the sound of past hit songs such as the groovy “Electric Feel,” the ethereal “Time to Pretend” or the joyous, uplifting “Kids,” all from the widely hailed and wildly popular  Oracular Spectacular.

But with that backdrop, MGMT did not fail to disappoint. Not only did the band play its new material with vigor and even aplomb, it created an atmosphere in which even the strangest of  Congratulations‘ songs flourished — a tall feat considering what the band was up against. For this to occur without a hitch, the band took care to perfect even the smallest details of the show, ensuring that every second of each song matched the light sequencing and the kaleidoscopic visuals playing on the screens at the back of the stage. The result was an encapsulating interpretation of the 12-minute “Siberian Breaks,” a perfectly on-point performance of the fast-paced “Brian Eno” and a rocking rendition of “It’s Working.”

Given the tepid and sometimes harsh reception Congratulations received, it is tempting to assume that any crowd would give MGMT a lukewarm response, but nothing more. Not so this time. Fans all around were enraptured, unable to contain their own excitement at a band that had achieved a near-perfect synchronization of mood, music and melodrama. Truthfully, they did not need to justify their unabashed pleasure — MGMT’s boisterous, possibly even overconfident set did that for them. Standing for most of the show, concertgoers showed their devotion to the band by disregarding the reduced expectations that seemed to ensnare MGMT after Congratulations‘ release. Chanting  along in unison to the melodic and slightly repetitive “Someone’s Listening,” and exploding in fits of applause after each song were just some of the ways they made their collective point that MGMT did not deserve to be written off, at least not on that night.

Fittingly, the hits off of Oracular Spectacular received the largest amounts of attention from the crowd, but that should not be taken to obscure the larger message of the show, namely that MGMT successfully blended its innovative music with an environment that only enhanced the experience for everyone listening. As a nameless woman whose face changed colors on the video screen behind the band members and the lights above flickered madly, one was tempted to believe that the commentary that had swirled around Congratulations after its release  was overhyped, premature or just plain wrong. It is genuinely difficult to pass judgment on the merits of that claim, but one thing was sure Saturday night: given the right environment, MGMT’s sophomore effort could be a resounding triumph.

As the set wore down, fans put on the usual clamor for an encore, which they received in two parts: first, with “The Handshake” and then “I Found a Whistle.” But the two closers might as well have been one song for they were effortlessly mixed to produce a thrilling ride that kept fans guessing when the finale truly had come. After what seemed to be a never-ending trip to another universe, MGMT’s members provided the audience with an outro that became an intro that became another outro, finally culminating amid high-pitched screams and an outpouring of unfiltered adoration. By the show’s end, everyone leaving understood the implicit message that the performance had yielded: MGMT could still pack a serious punch in spite of any expectations to the contrary, so much so that it has the potential to redefine the dynamics surrounding its own work.