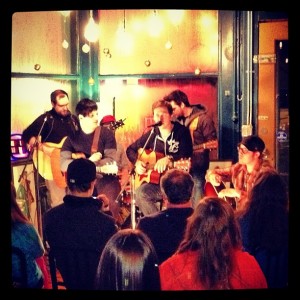 Mark Rose just wrapped up the final stretch of the “Warm Our Bones, Caffeinate Our Hearts” tour with JT Woodruff of Hawthorne Heights. Read about their last week out on the road below!

I just dropped JT off at the Chicago Megabus at 6:45AM. My plan is to write this blog, and then take an extended nap. I’m hoping for the kind of nap that causes me to miss an entire calendar day. This, however, is unlikely – as the natural light has already flooded my apartment.

Final week of shows were cold ones. Who am I kidding? I’m from Chicago – I’m supposed to be used to this, right? I really am not a fan of Winter touring, in general, unless you’re escaping the major winter elements. Aside from the last two shows in the Chicago area, we really did luck out on snow/ice not being a huge factor in our travels. That said, it was pretty brutal out last night in Chicago – and I applaud the folks who still made it out to the shows!

First up during this past week was another private show in Virginia (see my Facebook to meet the star of the show, in the form of a puppy who looked like a lion – facebook.com/markrosemusic). From there we had Zanesville & Dayton, OH – which were complete opposites. Zanesville was a free show at a local brewery called Weaselboy – and the place was awesome. The owner, Jay, is such a cool guy – and the food & drinks were delicious. I love doing brewery & winery tours when I’m on vacation, or visiting a new area – and while I didn’t get a traditional tour, I did get to sample most of their brews. My favorite was the Otter Blonde. Don’t judge. Dayton, OH landed me back at Ghostlight Coffee – a small, but character filled, local coffee shop. This was my second show there – and I hope to have many more. Great folks working, a wonderful vibe, and some of the best coffee around.

Next up was Bloomington, IN at Rhino’s – which is an all ages, youth center, kind of venue. While this show had the smallest attendance of the tour – it definitely reminded me why I spend so much time on the road performing. When you can have an amazing time just playing guitar on stage, singing your songs, and connecting with a small group of people who are genuinely listening – you know you’re doing something you truly love. There are very few venues in Bloomington – and this might be the ONLY place that regularly does all ages shows. The city hasn’t been a regular stop for me, over the years – but I would like to change that. It’s really not too far from Chicago – and makes sense between a handful of other markets. Note taken, by me.

From there, we headed into St Louis, for a pair of shows. I’ve been spending a lot of time in St Louis as of late. I’ve now performed five different shows there, since August – as well as attending a wedding. I’ve really grown fond of the downtown area – partially because it’s so open, and not that busy. I’ve also been down there on a Cardinals game day – and it’s the exact opposite. 8pm show was an all ages gig at a community art center called LEMP in the midst of a residential area – you’d drive right by it, if you didn’t know it was there. I absolutely consider this show one of my favorites of the tour. Set up on the floor without the PA, and with only a lamp between JT and I. Everyone there was piled onto couches, and you could hear a pin drop while we performed. Really special. The local artists who performed were great – and Mark, who runs the place, is such a sweet dude. Made us pasta and salad – and for anyone who tours – they know how welcomed a home cooked meal is. Especially on the 23rd day of the trip. Late show was a midnight set at a smoke-filled bar called Danno’s Pub. While I hated the smoke (remember when that was a thing?), the folks there were ready to party, and had been waiting for us to get there. I busted out a bunch of older Spitalfield tunes, and also some covers I haven’t played in a while. Shows like that where the beer is the clear headliner – but that is clearly okay. But seriously – the indoor smoking really got me thinking as to how that was ever okay!

We crossed into Illinois – and we were down to our last few shows. Bloomington-Normal was up first, which is where Illinois State University is located – and a couple other colleges as well. Venue was Firehouse Pizza – sports on the TVs, pizzas for days, and a solid stage & sound system. Definitely perfect for a college town establishment. Seems like they’ve been really supporting the local music scene, as the place was steadily filled up from when we arrived until the show was over. Had a good time – and saw some old pals & family friends. BloNo (as it’s often refereed to) is an area I’ve been visiting and performing at my entire life, so it was a welcomed stop on the tour.

Sweet home Chicago? Felt great to get back to home – though we were welcomed by some brutal weather. Ice, to be specific, and lots of it. There are few things I dislike more on the road than icy conditions. I can handle the cold – but driving a van when the conditions are slick is the worst. We played an early show in Elmhurst, and then wrapped things up in Chicago. Both shows were really fun – with two different sets of listeners (with the exception of the handful who attended both!). The later show also featured Bob Nanna (Braid, Hey Mercedes) – who is one of my best buddies, and favorite songwriters. Had a lot of fun sharing stories on stage with everyone – as we had no shortage of material after completing 32 shows in 26 days!

Gonna miss JT – but I’m sure I’ll be seeing him soon enough. I want to thank everyone who was involved with making this tour so special for me – and that includes you for reading, and idobi for hosting this blog! It was nice to get thoughts down on digital paper – and will be a fun read for me down the line. Hope you guys are enjoying the new music – and I look forward to getting back out there ASAP! Thanks again.