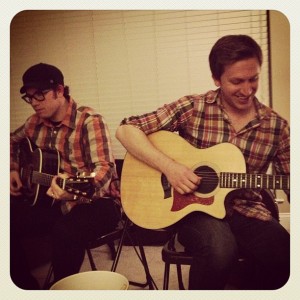 Former Spitalfield frontman Mark Rose has been keeping us updated on life on the road as he treks across America with Hawthorne Heights vocalist JT Woodruff. Catch up on week #3 of the tour below!

“Warm Our Bones, Caffeinate Our Hearts” is what we named this tour. As Georgia became Tennessee, and Tennessee became Ohio – the warmer temperatures faded. As to be expected! I do understand geometry. I also somewhat understand geography.

We kicked off this past week with back-to-back shows in Georgia – both just outside of Atlanta. I’m a big fan of spending time in Georgia. Folks don’t seem upset to see me, the weather is comfortable, and there is no shortage of Zaxby’s! That sauce. While playing at Swayze’s in Marietta – JT snuck a verse about Patrick Swayze into his song about musician friends who have passed away over the years. Not sure anybody caught it, except for me – and I loved it. See twitter feed (@MrMarkDRose) for photo of the giant cat we stayed with for two nights.

Then we headed to Knoxville. The sky rained upon us intensely – as if we had forgotten what that was like. Really cool show at the Longbranch Saloon– which I’ve now performed at three times in the last 9 months. If I was more into college sports, I think I’d really dig Knoxville. Had an overnight drive to swing back by JT’s house, outside of Cincinnati. Totally worth it – so JT could briefly see his wife & daughter, and most importantly, so I could do some laundry. Grabbed lunch at Skyline – and we were off to Columbus.

Show in Columbus was packed, but we’re not entirely sure for who. Ha! People DID pay a $10 cover – but people were also very loud, and didn’t seem to pay much attention. Confusing. Oh well! Could have been worse. We packed up up and drove a few hours that night, taking us to St Mary’s, WV. This is where JT grew up – and it was really cool to get a mini tour of the city, once we were back in the daylight. Had lunch at his favorite local pizza place (so many people saying hello to him), and even found time to visit his grandma. St Mary’s… population 1,200. St Mary’s… right down the street from Marietta College, where we were performing that night – which was awesome. Great sound, great crowd, excellent vibe. I even got to enjoy a little Bulls/Celtics on the tv after soundcheck, before the show. My kind of night! But again, no time to relax – hit the road after the show to get a few hours done on the road. We had another day of two shows to be ready for – the first of which was at noon in Asheville, NC.

Asheville is such a cool town – I wish I spent for time there! Definitely looking forward to going back. Played an intimate set at a quaint little coffee shop. Got wild, and ordered my coffee with a a peanut butter flavor shot! Had Wild Wing Cafe (my first experience) with some folks from the show– and then back in the van to Charlotte. 2nd intimate show of the day was in an apartment, which overlooked the Carolina Panthers stadium! We left Charlotte with a ripped DVD copy of Ladybugs (starring Rodney Dangerfield and Jonathan Brandis, RIP on both accounts). Not sure how, but it’s all we’ve ever wanted on this trip. Haven’t watched it yet– but plan to ASAP.

Today, we played outside of Richmond – in the upstairs of a house, which has been converted into a small recording studio. Event was private – and was also filmed & streamed for an online performance. Pretty cool! We made it early enough to watch some NFL football. I love the NFC/AFC championship games day as much, if not more, than the Super Bowl. I also love all of the different types of shows, and different types of people we’re meeting on this tour. Very inspiring.

One week of shows to go! Finally starting to route back towards Chicago. We’re 19 days, and 22 shows in. 7 days, and 9 shows to go! Thanks for reading.

Check back next week for the final installment! And don’t forget to keep up with Mark on Facebook and Twitter.