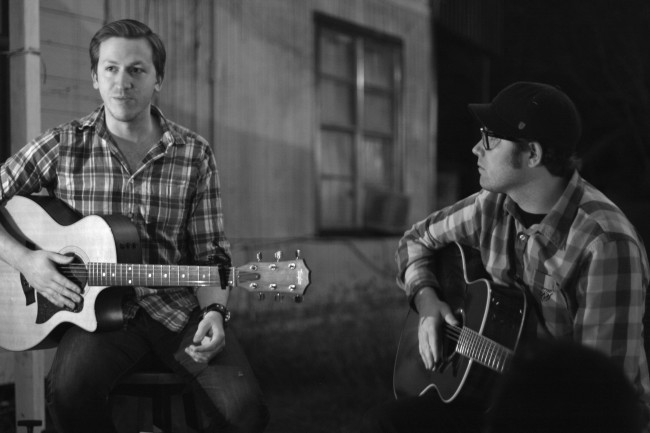 Last week we kicked off our first tour blog of the new year with Mark Rose as he began his adventure playing 31 shows in 26 days. Mark is back this week to catch us up on the second week of shows, being on tour with Hawthorne Heights frontman JT Woodruff, tour eats, and more – check it out below!

I haven’t been to Texas since 2007, with Spitalfield. Not exactly sure why it’s taken me so long to get back. Most of my solo touring has been focused in the Midwest & Northeast – which I think is a product of having more connections, shorter drives, and higher interest. That said – it was great to be back! All four shows were really cool, and each very unique to the other. Dallas, Waco, Corpus Christi, & Lufkin were the cites we hit, in that order. Saw a couple old friends, but feel I mostly played to new listeners, which was really cool. Gotta rebuild myself in new areas.

No trip through Texas would be complete without some delicious eats. JT had his heart set on getting Fuel City Tacos in Dallas. Like, he wanted to go there for dinner AND lunch the next day, on our way out. Upon hearing that Fuel City Tacos is legit in a gas station– I had my doubts. Needless to say, I was stoked to hit it for lunch the next day. I suggest the pastor!

Waco was such an awesome surprise. Sadly, we didn’t have time to hit the Dr Pepper Museum. Adding that to my list of things to do when I get back there. Show was at a place called Art Ambush – and even featured complimentary coffee & hot chocolate for those in attendance. I def recommend seeing a show there, especially if it’s a chill kind of thing. Also, met a dog who looked like a cross between Gizmo & Wicket – his name was Bear. See my twitter feed for a photo (@MrMarkDRose).

Passing through Austin, we stopped for BBQ at Salt Lick – another one of JT’s favorites. I have my own list of favorite spots to hit – but this is JT’s world, and I’m just eating in it. But again, I tip my nonexistent cowboy hat to him – it was delicious. Even grabbed a couple bottles of their sauce to go, to give to some friends back home! What a sweet ‘n spicy heart I am, sometimes.

Corpus Christi was a house performance – set up on a porch, with decorative lights strung up and around us. Really great turnout and vibe – had an awesome time. This blog post photo is from that show.

And, totally randomly, I was talking to some folks at the Lufkin, TX show who were from Dallas. First we chatted about the Dallas Cowboys, and Tony Romo. Then – I brought up our stop(s) at Fuel City, and they told me that one had JUST opened in Lufkin. WHAT? I immediately relayed this news to JT, who lit up like a Xmas tree. Guess where we ate after the show that night? Speaking of that night– we slept in what I’d describe as a pool house, but with no pool. We crash with folks when we can, to save money & have fun. In this case, it was extra fun, because no lights worked in the pool house. Wild card!

From TX, we headed into Louisiana. One of my best buddies is from Baton Rouge, so I’ve somewhat adopted a love for the state, their cities, schools, and cuisine. First stop was Lake Charles – where I’ve never been. Lake Charles itself is quite beautiful. Kind of an area I’d like to go to with a day off to spend hanging out.

After watching some NFL & grabbing lunch, we’re well on our way into Baton Rouge for tonight’s show as I type this. Surprise! It’s pouring outside. I kind of love driving on the highways here, which are right between heavily wooded marsh-land. I assume the gators are just waiting for us to slide into their jaws.

Up next, some quality time in Georgia, Tennessee, Ohio, & North Carolina. Gonna be ping-ponging around a little bit – but such is life. Nothing we can’t handle. Thanks for reading! Blog #3 coming next week. Thanks to idobi for hosting this – I haven’t written blog-type entries in years. Feels good!

Check back next Monday for Tour Blog #3! And don’t forget to keep up with Mark on Facebook and Twitter.