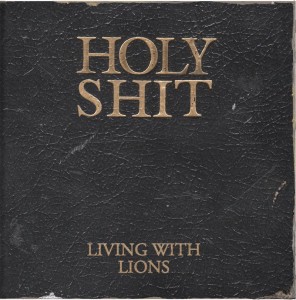 Living With Lions will be recalling all copies of their new album Holy Shit and returning the government loan they received to fund the record after controversy arose over its artwork. The album will be re-released within the next few weeks as a non-government funded project.

Last year, the Canadian government program FACTOR (Foundation Assisting Canadian Talent On Recordings) approved a $13,248 loan to the band’s label Black Box Recordings for the recording of the album. But upon its release, FACTOR came under fire for supporting the album.

In a statement to the Vancouver Sun, Heritage Minister James Moore’s spokesman said, “The content of this CD is offensive and the fact that it is clearly designed to offend a group of Canadians based on their faith is simply wrong.” The album’s packaging is designed to resemble a Bible and the artwork portrays Jesus as a piece of excrement, though the actual lyrics do not deal with any religious themes.

“In light of the recent controversy regarding the artwork for Living With Lions’ album, ‘Holy Shit,’ the band and label have voluntarily agreed to return the loan of $13,248.00 in its entirety, which was offered in support of this record. The product will be withdrawn from the domestic market immediately, and we requested our international partners to withdraw product internationally as well. We understand the band’s desire to maintain their creative integrity. Therefore the album will be re-released as a non-FACTOR supported project in the coming weeks.

The material was not intended to be offensive, though we regret it was interpreted that way. Further, we regret the negative attention that this matter has brought to FACTOR. FACTOR is an integral part of supporting and sustaining Canadian music domestically and internationally, and their support of our work and that of other Canadian musicians is invaluable.”