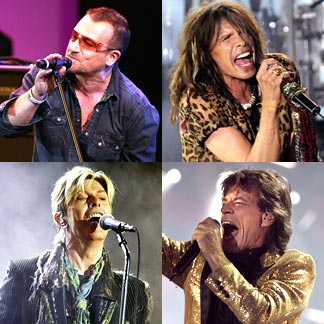 In true Las Vegas fashion, Sin City will usher in the New Year with “Tribute Palooza,” a concert featuring performances by David Bowie, the Eagles, U2, Kiss, the Rolling Stones, Queen, Aerosmith and Billy Joel… impersonators.

2U will substitute for U2, Queen Nation will copycat Freddie Mercury, Aeromyth will channel Aerosmith, the Long Run will welcome you to the Hotel California and much, much more. Unfortunately, despite the presence of not one but two KISS cover bands, neither act is the Rock Daily faves Mini-KISS.

The whole fake fest party will go down at Vegas’ infamously tented Fremont Street, where two stages will be erected to give fans 14 hours of cover-song goodness. Now, if this bonanza of unoriginality sounds like the lamest way to spend your New Year’s Eve… well, you’re probably right.

Thankfully, Rock Daily is your guide to having a much better December 31st than witnessing Satisfaction, a Rolling Stones Tribute. Behold, our New Year’s Eve guide, featuring the best concerts going down tonight across the country: New Year’s Eve Rock Guide: The Night’s Biggest Shows, From My Morning Jacket to Wu-Tang Clan