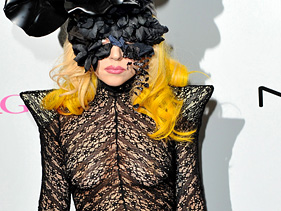 In a new interview with The Times of London, Lady Gaga gets deep on a number of topics – life, love, health, wealth and religion, to name just a few – and from the sound of things, all of those are going to be addressed on her new album.

“You know when people say, ‘If you could say one sentence about who you are, what your life is,’ it’s that. For the whole album,” Gaga told the paper. “Because I recently had this … miracle-like experience, where I feel much more connected to God.”

When The Times’ Caitlin Moran pressed Gaga to clarify her statement, she made it clear that the new album will not shy away from topics like God and religion, but the scope won’t just be limited to Gaga’s own Christian upbringing. The goal, she explains, is to explore them in an all-encompassing, broader sense.

“It’s more spiritual,” Gaga says. “I don’t want to say much, because I want it to stay hidden until it comes out – but I will say that religion is very confusing for everyone, and particularly me, because there’s really no religion that doesn’t hate or condemn a certain kind of people, and I totally believe in all love and forgiveness, and excluding no one.”

Gaga also says that, despite being in the middle of a seemingly endless world tour, she’s recording music “every day.” In fact, she said she has already completed the majority of the follow-up to her ultra-successful The Fame and The Fame Monster. But she was mum about just when her Little Monsters will be able to hear any of it.

“I can’t talk about it yet,” she said. “But everyone’s going to f—ing know about it when it comes out.”