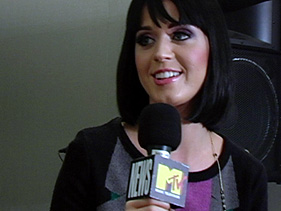 Earlier this month, tabloids began reporting that Katy Perry and Rihanna had become “inseparable” following the alleged February 8 altercation between the “Umbrella” singer and her boyfriend, Chris Brown.

According to a source quoted by U.K. tabloid The Sun, Perry “was there when Rihanna needed her the most,” reaching out to her and taking her out for nights on the town (there were even rumors of a planned Puerto Rican vacation). Until now, Perry had remained silent on those reports, but when MTV News caught up with her on Wednesday, she talked about her relationship with the embattled pop star.

“I don’t think I really, like, reached out to her. We’re friends and we’re both kind of on this crazy rollercoaster, and … it’s nice to have good girlfriends. I pride myself on having cool chicks in my life, and she’s a cool chick,” Perry said. “We’ve hung out a couple times. … Of course I consider her a friend, but it’s not like ‘I’m there,’ making a big deal of it, because I feel weird about that type of stuff. I’m trying to always be there for my friends. She’s a really cool chick. I love her style. … She’s one of those unaffected people.”

Perry added that – surprise! – tabloid reports had slightly exaggerated the extent of her friendship with Rihanna, saying that while they’ve hung out, there’s no Puerto Rican romp in the works.

“Um, you know, we’re just buddies. We’ve had dinner, and that’s about it,” she said. “Her personal life has probably already been blown, I don’t really have to go into that. I’m sure she probably wants a break.”

What Perry wouldn’t talk about was Rihanna’s current state.