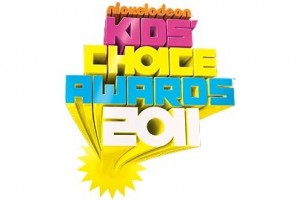 Miley took home one of the most coveted awards of the night, Favourite Movie Actress for The Last Song. In her acceptance speech the Can’t Be Tamed singer thanked her co-star and on-off boyfriend Liam Hemsworth for “helping me make movie magic”, fuelling rumours that the pair are back together.

Justin wasn’t at the Awards as he was in Berlin for his My World tour, but he sent thank you messages as Baby won Favourite Song and he was named Favourite Male Singer. Katy Perry got the female equivalent, while Justin’s girlfriend Selena Gomez won the TV Actress category.

Justin Timberlake accepted the Big Help Award for his work with charities, while Johnny Depp won Favourite Movie Actor for Alice In Wonderland. Jaden Smith was on hand as The Karate Kid won Favourite Movie and his sister Willow Smith performed 21st Century Girl and Whip My Hair.

Jack Black hosted the event and opening the show with a performance with the Black Eyed Peas.

As is tradition at the awards ceremony, some unlucky stars got covered in green slime. This year it was Jack Black, Snoop Dogg, Heidi Klum, Jim Carrey and Fergie’s other half Josh Duhamel.