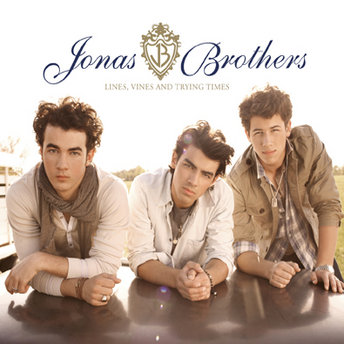 That’s no Abercrombie & Fitch advertisement – according to the Jonas Brothers’ official fan site and the band’s pre-order page, it’s the cover for the JoBros’ new album, Lines, Vines and Trying Times, out June 15th.  While the trio’s previous album, A Little Bit Longer, put the band in suits and a rain-soaked fluorescent-bulb-lit cityscape, Lines, Vines finds the casual Jonas crew leaning over what it is undoubtedly a pick-up truck. Essentially, they did a reverse Kings of Leon. These are “trying times,” as the title of the album and our wallets suggest, so the boys have scaled back on the gloss for something earthier.

“The title is a bit of poetry we came up with on the set for the TV show,” Nick Jonas told Rolling Stone for our Spring Music Preview. “Lines are something that someone feeds you, whether it’s good or bad. Vines are the things that get in the way of the path that you’re on, and trying times – well, obviously we’re younger guys, but we’re aware of what’s going on in the world and we’re trying to bring some light to it.”

In a recent conference call, the band made no secret as to who has influenced this record, with the name “Elvis Costello” mentioned six times and Prince called out four times. “This new album for us I wouldn’t say it’s a big jump but it definitely is a progression in our music and a growth for us. We’re very excited about this new album,” Joe Jonas said. “It feels like just a good growth in our music and it has a lot of more kind of horns in the record and a lot more strings. Also there’s more to the music rather than just a typical kind of relationship song.”