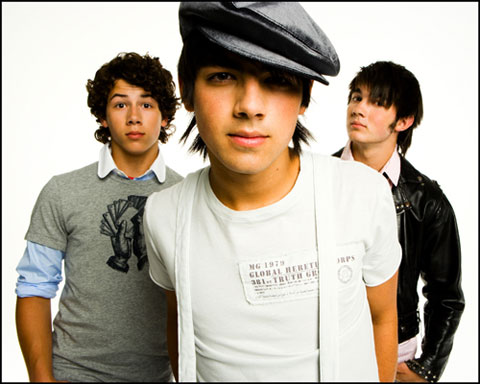 Hot teen pop trio the Jonas Brothers have vowed to stay virgins until they wed.

The three brothers, Kevin, Joe and Nick Jonas, have revealed they’ve sworn a vow of purity.

Joe, 18, says, “(We’ve made) promises to ourselves and to God that we’ll stay pure till marriage.”

The trio all wear purity rings to remind them of their pledge.

Nick, 15, who previously dated Miley Cyrus, tells Details magazine, “I got mine made at Disney World. It’s pretty awesome.”

Ten thousand screaming superfans demonstrated Wednesday night at Target Center that, after a few months as openers on the “Hannah Montana” tour, the Jonas Brothers can fill an arena on their own terms. The pop trio’s audience of primarily teen and pre-teen girls shrieked, yelled, gasped and jumped with excitement from before the opening act (Rooney) until after the encore, unable to contain their love for everything Jonas.
The show opened dramatically with the drop of a giant white curtain, revealing a multi-level stage complete with platforms and trap doors. An earth-shattering swell of screams erupted as curly-haired brothers Nick and Kevin Jonas pranced onto the stage with electric guitars, and the volume increased as an elevator lifted frontman Joe Jonas out of the center of the highest platform, dressed in a gold satin blazer and tight black pants.

Despite their young age (Nick, Joe and Kevin are 15, 18 and 20, respectively) the brothers commanded the stage, sliding masterfully down metal ramps and doing cartwheels off the platforms without breaking a sweat. Most surprising, these acrobatics seemed more like afterthoughts than the focus of the show — all three brothers played instruments (with the help of a four-piece backing band), showing that they have progressed beyond the archetypal boy band model of choreographed dance moves and lip-syncing.

Youngest brother Nick sang almost all of the lead vocals and was the clear leader of the band, despite the fact that Joe was placed center stage. The show was dominated by songs from last year’s self-titled sophomore album, including the singles “Hold On” and “Look Me in the Eyes.” During the power ballad “Hello Beautiful,” the three brothers sat down with acoustic guitars and showed the audience their sensitive side, pausing mid-song for almost a full minute to let the young ladies swoon.

The brothers played a handful of new tunes, which Nick announced that they had “just finished recording with John Fields,” the former Twin Cities musician and producer. The new material, including “Take a Breath,” “Don’t Take My Heart and Put It on a Shelf,” and “Pushing Me Away,” mostly conformed to the brothers’ style of sugary-sweet power pop, with the exception of the surprisingly sentimental and sincere “A Little Bit Longer,” which Nick played solo on a white grand piano during the encore. As his brothers rejoined him on stage, Nick wound into a brief cover of Carole King’s “So Far Away,” which may have gone undetected by the teens but was immediately recognized by all of the parents in the room. (The brothers also covered A-Ha’s “Take On Me,” which one mother explained to her daughter as “a really old song from the ’80s.”)

The night ended with an amped-up version of their hit single “SOS,” which had the whole room pogo-ing in a dizzying spectacle of flailing limbs and smiling faces. As the lights came up, the young girls filed out in a daze, completely spent from an exuberant evening with tween-pop’s newest sensation.

Andrea Myers is a Minneapolis music writer and managing editor of ReveilleMag.com.